With a (now deleted) tweet, Royal Jordanian Airlines has jumped the gun on a new ban by the US government expected to be announced on Tuesday: air travellers to the US from several Middle Eastern and African countries will be forced to stow all electronic devices in the airplane’s cargo hold. 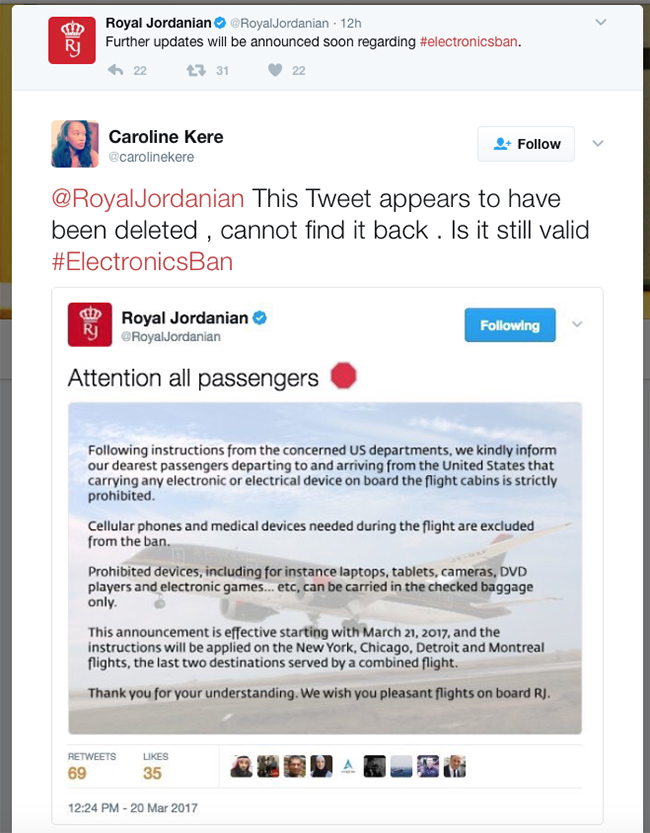 The only exceptions are phones and medical devices needed during the flight. Laptops, tablets, cameras, DVD players, electronic games and other gadgets will all have to be transported in the checked luggage. The other alternative for the passenger is not to bring those devices with them.

A BBC source from inside the US government said that the ban will affect travellers of nine airlines’ US-bound flights from ten airports:

The airlines have apparently been notified of the ban a few day in advance, so they could comply with it as soon as it is officially announced by the US Transportation Security Administration (TSA) on Tuesday, March 21.

The reason behind the ban is still unknown.

The TSA has thusly explained the reason behind the new ban: “The US Government is concerned about terrorists’ ongoing interest in targeting commercial aviation, including transportation hubs over the past two years, as evidenced by the 2015 airliner downing in Egypt, the 2016 attempted airliner downing in Somalia, and the 2016 armed attacks against airports in Brussels and Istanbul. Evaluated intelligence indicates that terrorist groups continue to target commercial aviation, to include smuggling explosive devices in various consumer items.”

So, the ban will require “that all personal electronic devices (PEDs) larger than a cell phone or smart phone be placed in checked baggage.” Approved medical devices will be allowed into the cabin after additional screening.

“These measures will be in effect indefinitely,” the Agency said.

In the meantime, there’s news that the UK will announce a similar ban later today, for devices of passengers on UK-bound flights from Turkey, Lebanon, Jordan, Egypt, Tunisia, and Saudi Arabia.