With phishing now widely used as a mechanism for distributing ransomware, a new NTT Security reveals that 77% of all detected ransomware globally was in four main sectors – business & professional services (28%), government (19%), health care (15%) and retail (15%).

While technical attacks on the newest vulnerabilities tend to dominate the media, many attacks rely on less technical means. According to the GTIR, phishing attacks were responsible for nearly three-quarters (73%) of all malware delivered to organizations, with government (65%) and business & professional services (25%) as the industry sectors most likely to be attacked at a global level. When it comes to attacks by country, the U.S. (41%), Netherlands (38%) and France (5%) were the top three sources of phishing attacks.

The report also reveals that just 25 passwords accounted for nearly 33% of all authentication attempts against NTT Security honeypots last year. Over 76% of log on attempts included a password known to be implemented in the Mirai botnet – a botnet comprised of IoT devices, which was used to conduct, what were at the time, the largest ever distributed denial of service (DDoS) attacks.

Attacks around the world 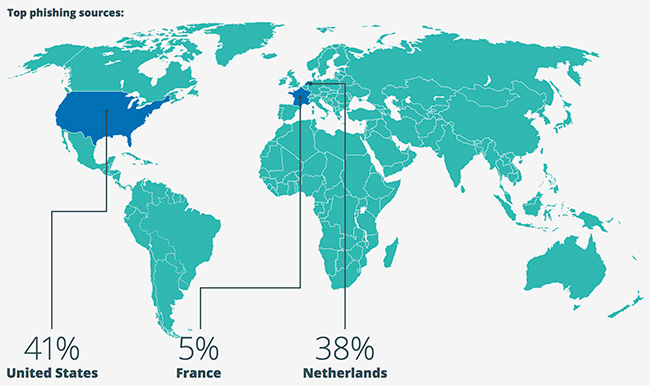 With visibility into 40 percent of the world’s internet traffic, NTT Security summarizes data from over 3.5 trillion logs and 6.2 billion attacks for the 2017 Global Threat Intelligence Report (GTIR). Analysis is based on log, event, attack, incident and vulnerability data.