When it comes to data compliance matters, one in five business decision makers within the UK admit they do not know which compliance regulations their company is subject to, while a worrying number do not believe the forthcoming GDPR applies to them, according to NTT Security.

The survey of 1,350 non-IT business decision makers across 11 countries, 200 of which are from the UK, reveals that just 39% of UK respondents think the GDPR will apply to them, the lowest of all the European countries surveyed, including Germany/Austria, France, Sweden, Norway and Switzerland.

A further 20% in the UK say they don’t know, suggesting that 41% are in denial of their future obligations relating to GDPR, which comes into force on 25 May 2018 – leaving companies with less than a year to comply with strict new regulations around data privacy and security.

The situation outside of Europe

The picture outside of Europe is also a concern, given that the legislation applies to any organisation anywhere in the world holding or collecting data on citizens in Europe and could result in penalties of up to €20m or 4% of annual turnover, whichever is higher.

Just 25% of respondents in the US believe it applies to them (20% don’t know) and 26% in Australia say they are subject to the new rules (19% don’t know). However, respondents in Germany/Austria (53%) and Switzerland (58%) seem to be well informed about the forthcoming legislation.

Is your data secure?

With data management and storage a key component of GDPR, the report raises serious concerns about knowledge of what data is being stored securely and where. Just four in ten (41%) UK respondents believe that all of their organisation’s data is secure, while around half (55%) say that all of their company’s critical data is secure.

However, UK decision makers are much less well informed than their counterparts in other countries about where their data is physically stored, with a little over half (57%) admitting they know – compared to a global average of 67%. Only France is lower, with just 54% of respondents knowing where their company data is stored.

The impact of new regulations

Asked if emerging new regulations will impact on where and how their organisation’s data is stored, 42% of respondents in the UK say ‘definitely’, 31% ‘think so’ and nearly one in five (18%) say ‘no’, which is double the global average of 9%, and the highest number of all of the countries surveyed.

“In theory, UK organisations should be well ahead of the curve when it comes to the EU GDPR, given that it is a European data protection initiative,” comments Linda McCormack, Vice President UK & Ireland at NTT Security. “You would hope that the date of 25 May 2018 is clearly marked in the calendars of any business, UK or otherwise, that collects or retains personally identifiable data from any individual in Europe. And Brexit is no excuse, as UK companies will still need to comply when dealing with countries in the EU. What’s clear from our report is that a significant number do not yet have it on their radar or simply do not know if it applies to them. The fact they do not know means there is no plan of action in place.

“While our respondents are not in an IT function, they should still be aware of any new compliance regulations affecting their company’s security and data, especially as the implications of non-compliance are very serious. The problem is that many see it as a costly and time-consuming exercise that delivers little or no value to the business, yet without it, they could find themselves losing customers, or having to pay very large regulatory fines.” 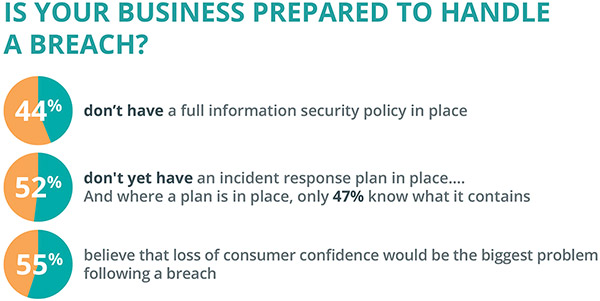