With last week’s release of Windows 10 Fall Creators Update, users get a new feature aimed at stopping ransomware from encrypting their most important files.

By default, it protects common folders where important data are stored – folders like Documents, Pictures, Movies, and Desktop. Those can’t be removed from the list of protected folders, but other folders can be added to it, including folders on other drives, network shares and mapped drives.

“You can also allow apps that you trust to access protected folders, so if you’re using unique or custom programs, your productivity is not affected,” Microsoft explained.

If, on the other hand, an unauthorized app tries to make a change to the files in those folder, it will be stopped and the user will get a notification about the attempt: 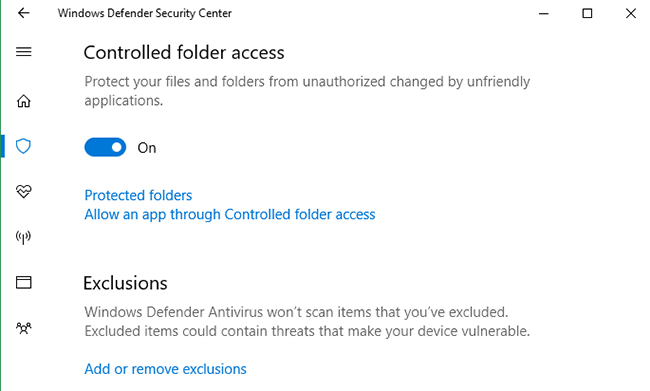 The endpoint alerts can be customized, so administrators can make them include instructions for end users on what to do next, e.g. immediately get in touch with the company’s help desk via email, phone or IM. More information on the whole process can be found here.

By the way, for controlled folder access to work, real-time protection in Windows Defender Antivirus must be enabled.

Does it actually work?

According to Bleeping Computer, it really does.

“Ultimately, while CFA is a great tool to protect folders from unwanted access, it won’t kill ransomware that access those folders. This means, that unprotected folders will still be encrypted, ransom notes will be displayed, and other unwanted behavior may occur,” they added.

Others have also tested and confirmed it’s efficacy.