ThreatMetrix released new cybercrime insights from the first half of 2018, revealing a sharp rise in fraud attack levels on mobile transactions. As consumer behavior increasingly embraces mobile for virtually all online goods and services, fraudsters are starting to close the gap on this channel. 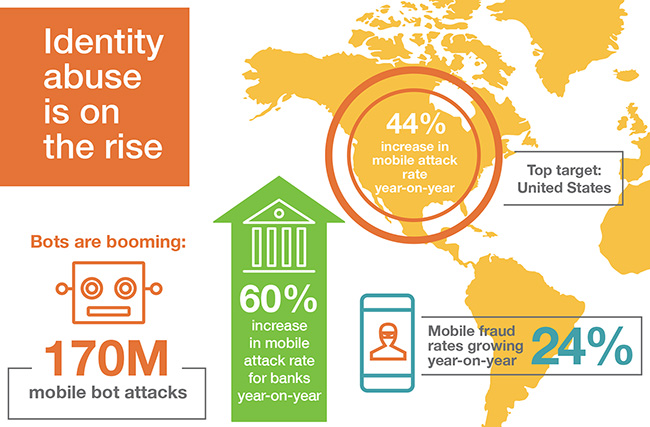 The rise of mobile is undisputedly the key change agent in digital commerce currently. According to ThreatMetrix data, in the last three years the proportion of mobile transactions versus desktop has almost tripled. Mobile transactions, which include account creations, logins and payments, reached 58% of all traffic by the middle of 2018.

Globally, one third of all fraud attacks are now targeting mobile transactions. This means that although digital companies do need to prepare for increasing attacks, mobile remains the more secure channel compared to desktop.

“Mobile is quickly becoming the predominant way people access online goods and services, and as a result organizations need to anticipate that the barrage of mobile attacks will only increase,” said Alisdair Faulkner, Chief Identity Officer at LexisNexis Risk Solutions. “The good news is that as mobile usage continues to increase, so too does overall customer recognition rates, as mobile apps offer a wealth of techniques to authenticate returning customers with a very high degree of accuracy. The key point of vulnerability, however, is at the app registration and account creation stage. To verify users at this crucial point, organizations need to tap into global intelligence that assesses true digital identity, compiled from the multiple channels that their customers transact on.”

Financial institutions were besieged with 81 million cybercrime attacks in the first half of 2018 on the ThreatMetrix global network. Of these, 27 million were targeting the mobile channel as fraudsters turn their attention to the success story that is mobile banking adoption.

Financial services mobile transactions are growing globally, with China, South East Asia and India showing the strongest regional growth. This indicates that the mobile channel is a key enabler for financial inclusion in emerging economies.

Throughout the first half of 2018 there was an unprecedented spike in the volume of bot attacks targeting digital transactions worldwide. The ThreatMetrix Digital Identity Network registered a 60% spike in bot attacks in the second quarter of the year, increasing from 1 billion bot attacks in Q1 to 1.6 billion in Q2. The sheer volume of this automated bot traffic impacts businesses worldwide because, without the correct measures in place, this slows order processing times and the ability to effectively identify good returning customers in real time. At peak times, individual organizations report these attacks account for more than half of all transactions.

This bot traffic in the first six months of the year predominantly originated from locations such as Vietnam and South Korea, illustrating the global trend of stolen identity data disseminating to growth regions and emerging economies.

Social networks are growing as gateway for cybercrime

Social networks and dating websites have the highest mobile footprint of all industries, reaching 85% of total transactions and 88% of account creations by the middle of 2018. This reflects usage patterns that virtually eschew desktop interactions and prioritize mobile app interactions. Given these sites’ often modest security requirements, attack rates are high as hackers use these platforms to test stolen identity credentials, as well as to steal sensitive personal data via account takeovers.

“Social networks are at risk of becoming a gateway to further organized crime”, says Rebekah Moody, Director of Fraud and Identity at ThreatMetrix. “Identity data is arguably as valuable a currency online as hard cash. Fraudsters funnel towards the easiest target to help test, augment and validate stolen identity data to make future attacks more successful: in many cases this is social networks. These organizations must start to deploy the same kind of defenses a user would expect elsewhere online, without introducing unnecessary friction.”

Identity spoofing is widespread, with the ThreatMetrix Q2 2018 Cybercrime Report revealing this as the top attack vector (13.3%) for this sector. IP spoofing is also prevalent, with fraudsters—predominantly from Vietnam, Ghana, Nigeria, U.S. and Philippines—using proxy servers to make it appear as though they are actually based in locations close to their intended victims.