2018 has been the year when cryptominers first dethroned ransomware as the most prevalent threat due to a meteoric spike in Bitcoin value in late 2017, then slowly trailed off when it began to nosedive.

It’s also been the year of the mega breach (Facebook, Marriott, MyHeritage, Quora, etc.), the year when extortionists and sextortionists began increasingly capitalizing on stale PII from old breaches, and the year when malicious spam replaced exploits as the favorite attack vector.

Finally, 2018 has also been the year when cybercriminals definitely realized businesses are juicier targets than individuals.

“Over the year, we have seen more attacks against businesses, more detections of malware on their endpoints, and a greater focus on what cybercriminals consider a more lucrative target,” Malwarebytes shared in its latest yearly State of Malware report.

Trojans – a broad designation used for malware that does not fall directly into spyware or adware or backdoor categories – tops the list of Malwarebytes’ most common business detections in all regions of the globe. 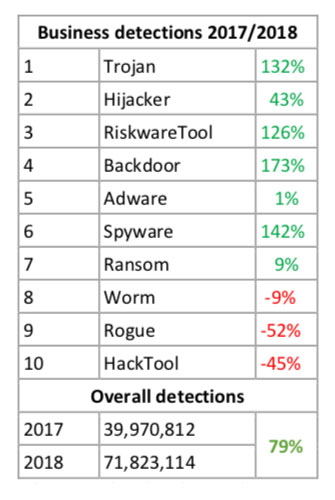 The category was topped by the Emotet family, which uses exploits (e.g., EternalBlue) to compromise unpatched systems, credential brute forcing to move laterally throughout corporate networks, and its built-in spam module to send out malicious spam and infect systems outside the network.

“Spyware detections have climbed significantly due to similar variants and families of Emotet and TrickBot being identified as spyware in the wild—a clear sign of the focus threat actors have placed on information stealing and establishing holds on corporate networks,” the researchers noted.

Emotet and TrickBot are former banking Trojans with have evolved into droppers with multiple modules for spam production, lateral propagation through networks, data skimmers, and even crypto-wallet stealers – in other words, ideal tools for stealing ultra-sensitive data from businesses.

Trickbot often accompanies Emotet, as the latter drops the former as a secondary payload. Like Emotet, it exploits a SMB vulnerability (with the EternalRomance exploit) for lateral movement inside a network.

Finally, ransomware is also being pushed more onto businesses. SamSam-wielding criminals continue to target organizations in many verticals, and it has recently been shared by CrowdStrike and FireEye researchers that a cybercriminal group dubbed Grim Spider has been using the Ryuk ransomware to exclusively target enterprises which have previously been compromised via the TrickBot Trojan.

With the proviso that they can only make educated guesses about the likely 2019 threats and trends, the researchers have shared their predictions for the year.

Interspersed among the expected ones – more IoT botnets, the slow death of cryptomining on desktops, the increase of frequency and sophistication of digital skimming, SMB vulnerabilities continuing to be challenging for organizations – are some uncommon ones: