2018 had the most weaponized vulnerabilities ever (177), which represents a 139% increase compared to 2017, according to the RiskSense latest report.

In addition, the rate of exploits discovered in the wild before a patch was available was nearly three times higher last year than the previous record set in 2010.

“The fact that attackers are weaponizing more vulnerabilities than ever before, and releasing exploits before patches are available, illustrates the need for a more holistic approach to vulnerability management and prioritization that is based on threat exploitability and weaponization metrics,” said Srinivas Mukkamala, CEO of RiskSense.

“For example, global exploit kits including Neutrino and Angler were taking advantage of vulnerabilities in the wild for more than a year before they were disclosed.”

2018 was most weaponized year on record

Most exploits are available before a patch is

2018 also had the highest number of exploits in the wild before a patch was available (50), compared to the previous record set in 2010 (18). This represents a nearly 200% increase.

The number of vulnerabilities in 2015 increased by 357 compared to 2014. Within that figure, 314 were high severity making 2015 the year with largest number of high-severity vulnerabilities. 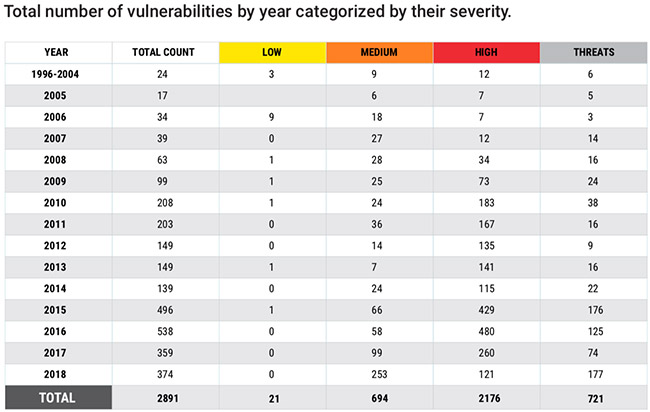 Buffer Overflow was most common vulnerability

Among the 2,891 vulnerabilities investigated, Buffer Overflow was the most common type across all years (1,094 CVEs), distantly followed by Out-of-bounds Read (195 CVEs) and Use After Free (160 CVEs) types.

Given the large number of organizations that depend on the Acrobat family of products for business workflows, this represents a major security concern.