A new European Union (EU)-funded project aims to disrupt criminals trafficking wildlife in or via the EU using the internet, postal or fast parcel services. The project is implemented by a strong coalition gathering WWF, IFAW, INTERPOL, the Belgian Customs and TRAFFIC. The project is led by WWF Belgium, in affiliation with TRAFFIC. 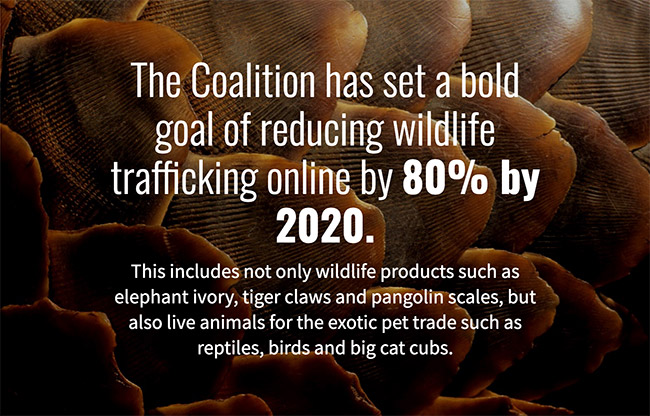 Funded by the Internal Security Fund of the Directorate General for Migration and Home Affairs of the European Commission, the two-year “Disrupting and dismantling wildlife cybercriminals and their networks in the European Union” project will help train customs, police and other enforcement officers across the EU to detect and deter wildlife trafficking. The project will also engage with delivery and online technology companies, to ensure wildlife traffickers do not exploit their services.

“The increasing volume of parcel deliveries, linked to the growth of e-commerce, represents a significant challenge for those enforcing the EU Wildlife Trade Regulations, who will benefit from the support provided through this project,” said Emilie Van der Henst, the WWF/TRAFFIC Project Coordinator.

The internet provides wildlife traffickers access to a vast international marketplace—one without borders that is open 24 hours a day, seven days a week, 365 days a year, where wildlife cybercriminals exploit the anonymity afforded to them online. Detecting and disrupting wildlife cybercrime is a critical component to ensure the survival of endangered and threatened wild animals.

More than 8000 specimens in just 6 weeks

“This project will enable IFAW to continue our pioneering approach into online wildlife crime in the EU, working with our partners to create a network of experts to defeat a criminal network,” said Tania McCrea-Steele, IFAW’s Global Wildlife Cybercrime Project Lead.

The wildlife cybercrime project will initially focus on Belgium, France, Germany and the Netherlands, identifying information on trends and developing tools, which will be of use to other EU Member States.

Alongside improved detection of wildlife trafficking, the project will work with online companies to remove accounts and advertisements of those offering wildlife illegally and make it harder for them to reach their customers online.

“We aim to throw a big spanner in the operations of wildlife cybercriminals and make their activities a high-risk, low-profit form of criminality,” said Emilie van der Henst, the WWF/TRAFFIC Project Coordinator.

One of the largest illegal global trade

Illicit trade in wildlife is estimated to be worth between 5-23 billion USD per year, making it one of the largest illegal global trade, after other transnational crimes such as drug trafficking and illegal logging, according to a 2017 Global Financial Integrity report.

In 2015, a United Nations (UN) resolution recognised the broader impacts of wildlife crime, which include corruption, money laundering, the undermining of good governance, the rule of law and the well-being of local communities and called upon nations to take appropriate action.

In 2016, the EU adopted the Action Plan against Wildlife Trafficking and Member States made environmental crime one of their 10 priorities in their efforts to address serious international and organised crime for the period 2018–2021.