Data from an external survey of 200 enterprise security leaders, conducted by Censuswide, reveals concerns on visibility and access to trusted data, leaving organizations open to attack. Fuelling this issue is an inability to receive timely visibility across a multitude of installed security technologies.

The vast majority (89%) of security leaders at large enterprises are struggling with visibility and insight into trusted data. Nearly a third (31%) are concerned that a lack of visibility will impact their ability to adhere to regulations.

Complex and fragmented IT environments have compounded the visibility challenges for security teams. These issues are being exacerbated by the sheer number of security tools in use. On average, enterprise security teams are grappling to manage an average of 57.1 discreet security tools.

Over a quarter of respondents (26.5%) claimed to be running 76+ security tools across their organisation.

The survey results indicate that as well as obfuscating visibility, the security tools aren’t necessarily helping to make the organisation safer. When asked about the key drivers for new security initiatives and tools, the majority (55%) are being driven by external factors, such as regulations and internal factors (32%), such as board driven initiatives.

However, when asked how effective the current security tools were, nearly three quarters (70.5%) of security leaders admitted that they do not evaluate a security tool based on its impact on reducing cyber risk.

“Ultimately we are buying tools and not switching them on, because we lack visibility across security controls and technical assets. Buying more tools does not equate to enhanced security. Ironically in many cases they impair visibility and cause bigger headaches as they often integrate poorly, have overlapping functionality and gaps in coverage,” said Nik Whitfield, CEO, Panaseer.

To help overcome these visibility issues and satisfy requests for information from internal and external parties, security leaders are having to direct their staff to spend an inordinate amount of time compiling manual reports, across their large number of discreet tools. This has resulted in security teams now spending over a third of their time (36%) manually producing reports. 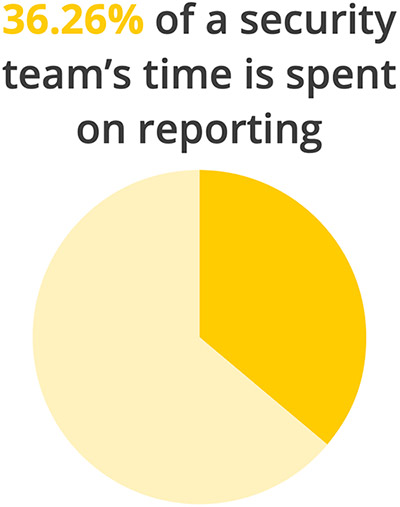 When asked how they spend manual reporting time, the biggest task is formatting and presenting data (38.46%), followed by moving data (34.62%) across spreadsheets. 70% of security teams use manually compiled data for reporting to the Board, 57% claim they send manual reports to regulators and half (50%) said that they shared manually collated reports with auditors.

Nik Whitfield continues: “Manual reporting creates a huge overhead for the business. It also means that during a cyber skills shortage, we have specialist staff wasted doing very basic work. Manual reports are so prone to error, as they can only give a single snapshot in time and are then out of date almost immediately. Automation is an opportunity to enable greater speed, error reduction and crucially enhanced visibility.”