Cybercrime campaigns and high-profile advanced persistent threat groups are shifting how they target victims and focusing more on intricate relationships with “secure syndicate” partnerships to disguise activity, according to the latest 2019 Cyber Threatscape Report from Accenture.

“Over the past year, cybercriminals have continued to test the resilience of organizations by layering attacks, updating techniques and establishing new, intricate relationships to better disguise their identities, making attribution more difficult to pursue,” said Josh Ray, a managing director at Accenture Security.

“Organizations should understand the tangible elements, or the bread crumb trail left behind, which can help reveal the motivations, operational procedures and tool use, to create a profile of the adversary. This process is critical for organizations to understand so they can proactively be involved in properly allocating resources and improving their security posture to avoid becoming cybercrime’s next victim.”

Despite the arrests of individuals associated with online underground marketplaces, activity among infamous threat actor groups – such as Cobalt Group, FIN7 and Contract Crew – has continued. Accenture Security analysts have also observed the shared use of tools that automate the process of mass-producing malicious documents to spread malware, such as More_Eggs, which is used in both conventional crimeware campaigns and targeted attacks.

The continued activity is associated with relationships forming among “secure syndicates” that closely collaborate and use the same tools – suggesting a major a change in how threat actors work together in the underground economy. With syndicates working together, the lines are even more blurred between threat actor groups, making attribution more difficult.

In addition, Accenture Security analysts have observed a shift in the way Cobalt Group targets victims to gain access to the victims’ supply chain networks. While malware has typically been sent to internet users via phishing emails, analysts now see an emergence of malware executed through web browsers focused on targeting online merchants and retailers specifically.

The report also finds evidence of a continued global disinformation battlefield influencing social media users and cautions that threat actors are becoming more skilled at exploiting legitimate tools. While disinformation campaigns to influence both domestic or foreign political sentiment and sway national elections will continue, the wider potential impact of disinformation on global financial markets is even more concerning, the report notes.

The financial services industry – and, more specifically, high-frequency trading algorithms, which rely upon fast, text-driven sources of information – are likely to be targeted by large-scale disinformation efforts in the future. 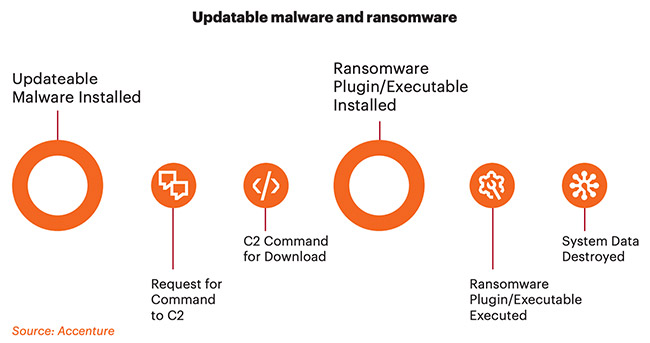 In addition, ransomware is increasingly plaguing businesses and government infrastructures, with the number of ransomware attacks more than tripling in just the past two years. Aside from delivery via spam campaigns, analysts have witnessed threat groups Nikolay and GandCrab planting ransomware directly on networks through network access intrusions. Actors are offering to sell remote desktop protocol (RDP) access to corporate networks, which they’ve likely gained through compromised servers and RDP brute forcing, to those in underground communities.