The global network attached storage (NAS) market is anticipated to experience lucrative growth in the ensuing years. The increasing popularity of NAS devices among small businesses and enterprises across a plethora of industrial sectors is the primary factor behind this growth. 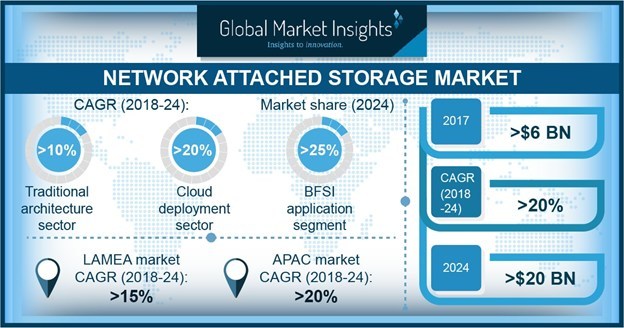 With many public and private industrial sectors going through the digital transformation trend, data is increasingly becoming a critical asset. Today, without access to their respective data, many companies are not capable of providing their patrons the level of service they have come to expect.

Poor customer service, caused by data access unavailability, often results in loss of sales and issues with team collaboration. Moreover, in terms of data storage, companies also need to address a number of other storage-related demands like ease of operation, affordability, scaling capabilities and ease of backup.

Network attached storage devices are becoming increasingly popular among these enterprises due to their ability to address all the aforementioned demands. A NAS storage device, connected to the network, allows data storage and access from a centralized location, making up a scalable, effective and affordable storage solution.

Leveraging the ability to address such storage demands, the global network attached storage market size is slated to grow substantially over the coming years.

Among these, the hybrid NAS segment is slated to witness the fastest growth during the forecast study period. Hybrid NAS allows companies to store any crucial data on their respective premises while also leveraging the scalable nature of cloud-based storage to accommodate any dynamic storage requirements.

In fact, according to an Intel Solution Brief, as it facilitates the benefits of the on-premise NAS deployment model with the scalability advantage of cloud-based storage, many NAS system manufacturers have now begun including hybrid NAS systems in their respective product portfolios. Manufacturers are expected to intensely promote these solutions to boost their revenues.

Going forward, the growing prominence of hybrid NAS systems, when coupled with the increasing dedication of NAS system manufacturers to the hybrid NAS deployment model, is expected to further augment global market outlook.

From a regional perspective, the global network attached storage market is divided into North America, Asia-Pacific, Europe, and LAMEA. Among these regional segments, North America is slated to account for a major share of the global market landscape across the forecast timeline.

In 2017 the North America NAS market already held a majority industry share of approximately 48%. The region’s expansion is primarily attributed to early advanced storage technology adoption by a number of enterprises across the United States.

Additionally, supported by wide-scale cloud platform adoption and the presence of a sophisticated cloud infrastructure from players like Microsoft, Amazon Web Service (AWS), and IBM, the overall adoption of NAS solutions across North America is projected to rise consistently during the forecast time period.

Meanwhile, Europe is expected to retain its position as the second-largest network attached storage market by 2024. The region’s consistent performance is being attributed to a flourishing data center ecosystem across the region. Adoption of the NAS storage technology by the region’s SMEs on an extensive scale is another prominent driver helping Europe retain its position.

According to the European Commission, SMEs form the backbone of European economy as they represent approximately 99% of all businesses throughout the European Union. Over the previous five years, SMEs have created more than 85% of new jobs, providing two-thirds of the private sector employment across the EU.

The European Commission regards SMEs and entrepreneurship to be crucial factors for ensuing the region’s economic growth, job creation, innovation and social integration. With prominent global players aggressively establishing their presence in Europe by forging distribution agreements with local firms, NAS system adoption is anticipated to increase considerably by 2024.