The question of whether our smartphones are always listening to us is cropping up on online forums and Twitter almost daily, and most users have had the experience of talking about something then, soon after that, seeing online ads about that specific thing.

Have you ever had the experience of talking about something, then seeing an online ad related to that real-world conversation, as if your phone is ‘listening’?

But are the phones (or apps) actually “listening”? Could it simply be that ad-serving companies have access to too much data about us and our online and offline behaviour (and that of our nearest and dearest), allowing them to predict what we might want or need? Or is our mind playing tricks on us?

Mobile security company Wandera has decided to check whether smartphones are “listening” our conversations and sending out voice recordings while we’re not using them.

The company took two iPhones and two Samsung Galaxy phones and put one of each in an audio test room (where a pet food YouTube playlist ran on a loop for 30 minutes for three days in a row) and a silent test room.

Each of the phones had Facebook, Instagram, Chrome, Snapchat, YouTube, and Amazon apps installed, with all user permissions. During the testing, the apps were closed, automatic app updates were disabled, and the phones locked.

After the 30-minute test periods, the researchers unlocked the devices and recorded battery consumption, data consumption, and background usage of apps, then checked each of the apps for pet food-related apps.

The result? No or a very minimal increase of data and battery consumption by the dormant phones in the audio room and no pet food ads showing up after the tests on any of the apps. 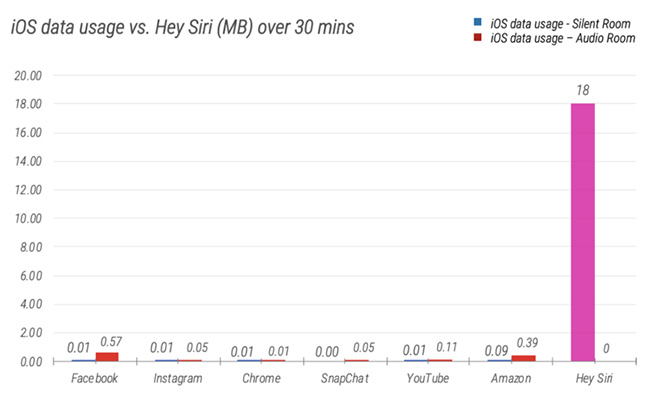 “We observed that the data from our tests is much lower than the virtual assistant data over the 30-minute time period, which suggests that the constant recording of conversations and uploading to the cloud is not happening on any of these tested apps. If it was, we’d expect data usage to be as high as the virtual assistants’ data consumption,” said James Mack, a systems engineer at Wandera.

No evidence of phones or apps “listening”

Eldar Tuvey, one of the company’s founders and its CEO, told the BBC that they found no evidence of phones listening in on users’ conversations. He did say that it might be happening in a way that they don’t know about, but that it’s highly unlikely.

It’s good to note that, previously, a much longer study by researchers at Northeastern University also found no evidence that Android apps are secretly switching on phones’ microphone and/or sending audio out. (Though, they said, it’s possible that an app might have transformed an audio recording into a text transcript and sent that without their system noticing it.)

Ultimately, I don’t know what’s scarier: the likes of Facebook and Google “listening” and analyzing our conversations or knowing so much about us that they don’t have to.