Although nearly half (48%) of corporate data is stored in the cloud, only a third (32%) of organizations admit they employ a security-first approach to data storage in the cloud, according to a global study from Thales, with research from the Ponemon Institute.

Surveying over 3,000 IT and IT security practitioners in Australia, Brazil, France, Germany, India Japan, the United Kingdom and the United States, the research found that only one in three (31%) organizations believe that protecting data in the cloud is their own responsibility.

With the proliferation of cloud-based services, businesses and other organizations are increasingly dependent on cloud providers. In fact, nearly half (48%) of organizations have a multi-cloud strategy, with Amazon Web Services (AWS), Microsoft Azure and IBM being the top three. The study found that, on average, organizations use three different cloud service providers and over a quarter (28%) are using four or more.

Despite storing sensitive data in the cloud, nearly half (46%) surveyed revealed that storing consumer data in the cloud makes them more of a security risk. Over half (56%) also noted that it posed a compliance risk.

In addition, organizations believe that cloud service providers bear the most responsibility for sensitive data in the cloud (35%), ahead of shared responsibility (33%) and themselves (31%). Even though businesses are pushing the responsibility to cloud providers, only 23% say security is a factor in selecting them.

“With businesses increasingly looking to use multiple cloud platforms and providers, it’s vital they understand what data is being stored and where,” said Larry Ponemon, chairman of the Ponemon Institute. “Not knowing this information makes it essentially impossible to protect the most sensitive data – ultimately leaving these organizations at risk. We’d encourage all companies to take responsibility for understanding where their data sits to ensure it’s safe and secure.”

Handing over keys to cloud providers

Roughly half (51%) of businesses and other organizations still do not use encryption or tokenization to protect sensitive data in the cloud. The study uncovered regional disparities in terms of data security, with German organizations being the most advanced in their use of encryption at 66%.

Organizations are handing over the keys to their encrypted data to cloud providers. Nearly half of cloud companies (44%) provide the encryption keys when data is encrypted in the cloud, ahead of in-house teams (36%) and third parties (19%). On top of this, 53% are controlling these encryption keys themselves, despite 78% saying it’s important their organization retains control of the keys. 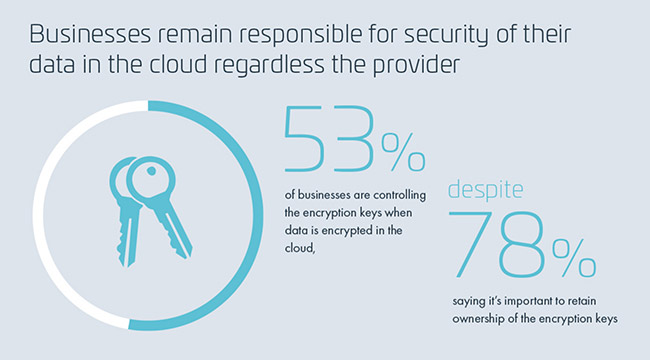 Over half of businesses (54%) think cloud storage makes it more difficult to protect sensitive data, up from 49% last year. More than 70% believe that data in a cloud environment is harder to protect due to the complexity of managing privacy and data protection regulations, while an additional two-thirds (67%) cited the difficulty of applying conventional security methods in the cloud.

“This study shows that businesses today are taking advantage of the opportunities that new cloud options offer, but aren’t adequately addressing data security,” said Tina Stewart, vice president of market strategy for cloud protection and licensing activity at Thales. “Having pushed the responsibility towards cloud providers, it is surprising to see that security is not a primary factor during the selection process. It doesn’t matter what model or provider you choose, the security of your business’ data in the cloud has to be your responsibility. Your organization’s reputation is on the line when a data breach occurs, so it is critical to ensure in-house teams keep a close eye on your security posture and always retain control of encryption keys.”