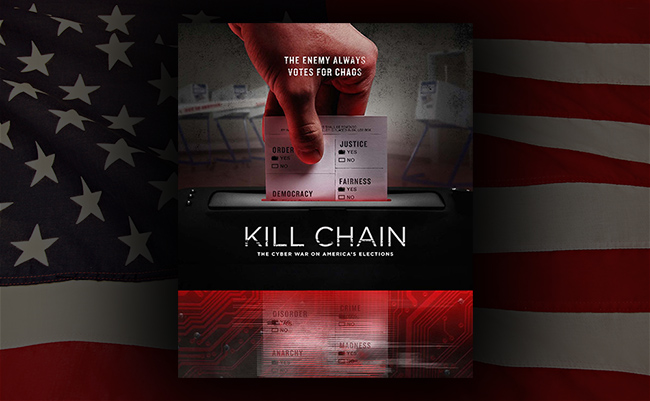 Kill Chain is an HBO documentary made and produced by Simon Arizzone, Russell Michaels and Sarah Teale.

Kill Chain: Inside the documentary

Arizzone and Michaels already worked on a documentary in 2006 called Hacking Democracy, which was about uncovering voting machines vulnerabilities and about how votes were manipulated, leading to George W. Bush winning the elections (2004).

And here we are again in 2020 talking about the same problem and uncovering the same old security holes inside the machines that are supposed to be secure and reliable, since they have the essential role of ensuring democracy is being practiced properly.

The authors gathered various experts, including Harri Hursti, a hacker and election security expert, to talk about their view and knowledge of the U.S. election system.

Hursti already warned about the hackability of the election machines in 2006. Now, once again, he went on a mission to expose the susceptibility of the U.S. election system by analyzing the machines currently in use, but also the discarded ones which he easily got hold of through eBay. As if that weren’t enough, the purchased ones still contained voting data.

He then decided to test the hackability of the machines by allowing hackers at the DEF CON hacker convention to try to access them. The task was shockingly easy and every single machine has been successfully breached, which meant anyone could effortlessly manipulate the election results.

The authors also interviewed a hacker that goes by “CyberZeist”, who claimed to have accessed the Alaska voting system website with little effort. Had he been backed by an organization with an agenda, the repercussions would have been much greater.

The documentary gives you the technical information about how a kill chain works and a hacker’s potential motivation, whether it’s personal satisfaction and gain or political reasons. It also sheds light on how technology is supposed to make things faster and easier but how, in the end, it can be easily manipulated.

Does it hit the spot?

This is an eye-opening and captivating documentary accompanied by an eerie soundtrack that complements the seriousness of the issue well. The technical parts are well explained and comprehensible to the average viewer.

A great number of politicians and decision-makers continue to dismiss warnings and refuse to pass bills that would guarantee a secure and protected election system. Experts are worried, but without political backup, there’s not much they can do about it. Hopefully, this documentary will make U.S. citizens worry about the outcomes of future elections and push them to demand changes.

Here’s a trailer for the documentary: