LogMeIn users are being targeted with fake security update requests, which lead to a spoofed phishing page.

“Should recipients fall victim to this attack, their login credentials to their LogMeIn account would be compromised. Additionally, since LogMeIn has SSO with Lastpass as LogMeIn is the parent company, it is possible the attacker may be attempting to obtain access to this user’s password manager,” Abnormal Security noted.

The phishing email has been made to look like it’s coming from LogMeIn. Not only does the company logo feature prominently in the email body, but the sender’s identity has been spoofed and the phishing link looks, at first glance, like it might be legitimate: 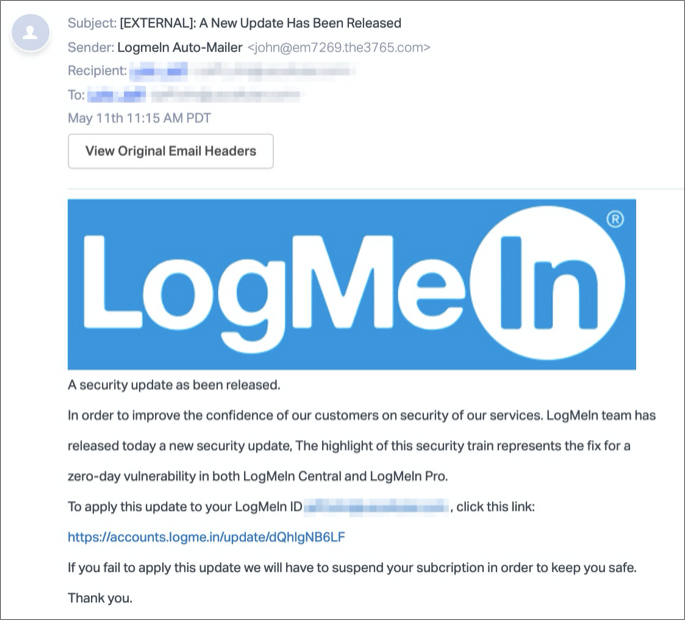 “The link attack vector was hidden using an anchor text impersonation to make it appear to actually be directing to the LogMeIn domain,” Abnormal Security explained.

“Other collaboration platforms have been under scrutiny for their security as many have become dependent on them to continue their work given the current pandemic. Because of this, frequent updates have become common as many platforms are attempting to remedy the situation. A recipient may be more inclined to update because they have a strong desire to secure their communications.”

This LogMeIn-themed phishing campaign is a small one, but users should know that the company has seen an “incredible uptick” in collaboration software impersonations in the past month.

Be careful when perusing unsolicited email, even if it looks like it’s coming from a legitimate source. If you have to enter login credentials into a web page, make sure you landed on that page by entering the correct URL yourself or by opening a bookmark – and not by following a link in an email.

In this particular case, you can be sure that if LogMeIn asks you to update something, the request/reminder will be shown once you access your account, so you’re not losing anything by ignoring the email and the link in it.