Data breaches cost companies $3.86 million per breach on average, and compromised employee accounts are the most expensive root cause.

Based on in-depth analysis of data breaches experienced by over 500 organizations worldwide, 80% of these incidents resulted in the exposure of customers’ personally identifiable information (PII). Out of all types of data exposed in these breaches, customer PII was also the costliest to businesses.

As companies are increasingly accessing sensitive data via new remote work and cloud-based business operations, the report sheds light on the financial losses that organizations can suffer if this data is compromised.

Conducted by the Ponemon Institute, the 2020 Cost of a Data Breach Report is based on in-depth interviews with more than 3,200 security professional in organizations that suffered a data breach over the past year. Some of the top findings from this year’s report include:

Smart tech slashes breach costs in half: Companies who had fully deployed security automation technologies (which leverage AI, analytics and automated orchestration to identify and respond to security events) experienced less than half the data breach costs compared to those who didn’t have these tools deployed – $2.45 million vs. $6.03 million on average.

Paying a premium for compromised credentials: In incidents where attackers accessed corporate networks through the use of stolen or compromised credentials, businesses saw nearly $1 million higher data breach costs compared to the global average – reaching $4.77 million per data breach. Exploiting third-party vulnerabilities was the second costliest root cause of malicious breaches ($4.5 million) for this group.

“When it comes to businesses’ ability to mitigate the impact of a data breach, we’re beginning to see a clear advantage held by companies that have invested in automated technologies,” said Wendi Whitmore, Vice President, IBM X-Force Threat Intelligence. “At a time when businesses are expanding their digital footprint at an accelerated pace and security industry’s talent shortage persists, teams can be overwhelmed securing more devices, systems and data. Security automation can help resolve this burden, not only enabling a faster breach response but a significantly more cost-efficient one as well.”

Stolen or compromised credentials and cloud misconfigurations were the most common causes of a malicious breach for companies in the report, representing nearly 40% of malicious incidents. With over 8.5 billion records exposed in 2019, and attackers using previously exposed emails and passwords in one out of five breaches studied, businesses should rethink their security strategy via the adoption of a zero-trust approach – reexamining how they authenticate users and the extent of access users are granted.

Similarly, companies’ struggle with security complexity – a top breach cost factor – is likely contributing to cloud misconfigurations becoming a growing security challenge. The 2020 report revealed that attackers used cloud misconfigurations to breach networks nearly 20% of the time, increasing breach costs by more than half a million dollars to $4.41 million on average – making it the third most expensive initial infection vector examined in the report.

Despite representing just 13% of malicious breaches studied, state-sponsored threat actors were the most damaging type of adversary according to the 2020 report, suggesting that financially motivated attacks (53%) don’t translate into higher financial losses for businesses. The highly tactical nature, longevity and stealth maneuvers of state-backed attacks, as well as the high value data targeted, often result in a more extensive compromise of victim environments, increasing breach costs to an average $4.43 million.

In fact, respondents in the Middle East, a region that historically experiences a higher proportion of state-sponsored attacks compared to other parts of the world , saw an over 9% yearly rise in their average data breach cost, incurring the second highest average breach cost ($6.52 million) amongst the 17 regions studied. Similarly, the energy sector, one of the most frequently targeted industries by nation states, experienced a 14% increase in breach costs year over year, averaging $6.39 million.

The report highlights the growing divide in breach costs between businesses implementing advanced security technologies and those lagging behind, revealing a cost-saving difference of $3.58 million for companies with fully deployed security automation versus those that have yet to deploy this type of technology. The cost gap has grown by $2 million, from a difference of $1.55 million in 2018.

Companies in the study with fully deployed security automation also reported significantly shorter response time to breaches, another key factor shown to reduce breach costs in the analysis. The report found that AI, machine learning, analytics and other forms of security automation enabled companies to respond to breaches over 27% faster than companies that have yet to deploy security automation – the latter of which require on average 74 additional days to identify and contain a breach.

Incident response (IR) preparedness also continues to heavily influence the financial aftermath of a breach. According to the report, companies with neither an IR team nor testing of IR plans experience $5.29 million in average breach costs, whereas companies that have both an IR team and use tabletop exercises or simulations to test IR plans experience $2 million less in breach costs – reaffirming that preparedness and readiness yield a significant ROI in cybersecurity. 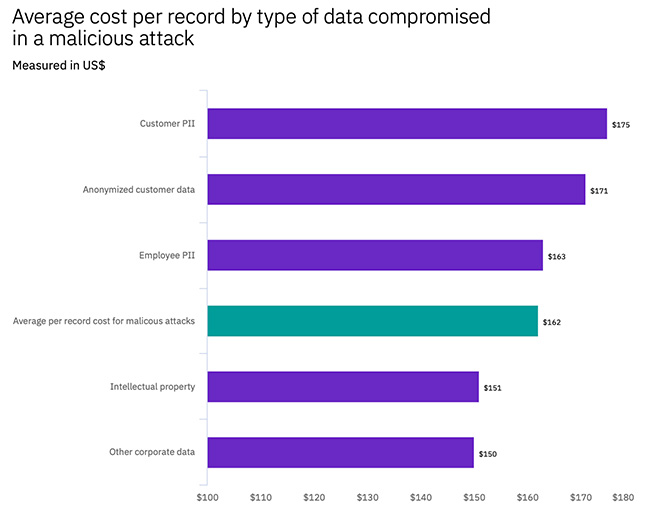 Additional findings from this year’s report