Trustwave released a report which depicts how technology trends, compromise risks and regulations are shaping how organizations’ data is stored and protected. 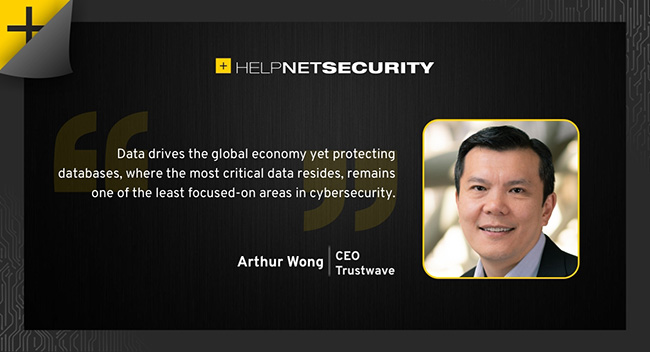 The report is based on a recent survey of 966 full-time IT professionals who are cybersecurity decision makers or security influencers within their organizations.

Over 75% of respondents work in organizations with over 500 employees in key geographic regions including the U.S., U.K., Australia and Singapore.

“Data drives the global economy yet protecting databases, where the most critical data resides, remains one of the least focused-on areas in cybersecurity,” said Arthur Wong, CEO at Trustwave.

“Our findings illustrate organizations are under enormous pressure to secure data as workloads migrate off-premises, attacks on cloud services increases and ransomware evolves. Gaining complete visibility of data either at rest or in motion and eliminating threats as they occur are top cybersecurity challenges all industries are facing.”

Types of data organizations are moving into the cloud have become increasingly sensitive, therefore a solid data protection strategy is crucial. Ninety-six percent of total respondents stated they plan to move sensitive data to the cloud over the next two years with 52% planning to include highly sensitive data with Australia at 57% leading the regions surveyed.

Not surprisingly, when asked to rate the importance of securing data regarding digital transformation initiatives, an average score of 4.6 out of a possible high of five was tallied.

Of those surveyed, most at 55% use both on-premises and public cloud to store data with 17% using public cloud only. Singapore organizations use the hybrid cloud model most frequently at 73% or 18% higher than the average and U.S. organizations employ it the least at 45%.

Government respondents store data on-premises only the most at 39% or 11% higher than average. Additionally, 48% of respondents stored data using the hybrid cloud model during a recent digital transformation project with only 29% relying solely on their own databases.

Most organizations use multiple cloud services

Thirty-eight percent of organizations are most concerned with malware and ransomware followed by phishing and social engineering at 18%, application threats 14%, insider threats at 9%, privilege escalation at 7% and misconfiguration attack at 6%.

Respondents in the government sector had the highest incidents of insider threats at 13% or 5% above the average.

A resounding 96% of respondents have patching policies in place, however, of those, 71% rely on automated patching and 29% employ manual patching. Overall, 61% of organizations patched within 24 hours and 28% patched between 24 and 48 hours.

The highest percentage patching within a 24-hour window came from Australia at 66% and the U.K. at 61%. Unfortunately, 4% of organizations took a week to over a month to patch.

In addition to a high percentage of organizations using automated patching processes, findings show 89% of respondents employ automation to check for overprivileged users or lock down access credentials once an individual has left their job or changed roles.

This finding correlates to low concern for insider threats and data compromise due to privilege escalation according to the survey. Organizations must exercise caution when assuming removal of user access to applications to also include databases, which is often not the case.

When asked if data regulations such as GDPR and CCPA impacted database security strategies, a surprising 60% of respondents said no.

These findings may suggest a lack of alignment between information technology and other departments, such as legal, responsible for helping ensure stipulations like ‘the right to be forgotten’ are properly enforced to avoid severe penalties.