Positive Technologies performed instrumental scanning of the network perimeter of selected corporate information systems. A total of 3,514 hosts were scanned, including network devices, servers, and workstations. 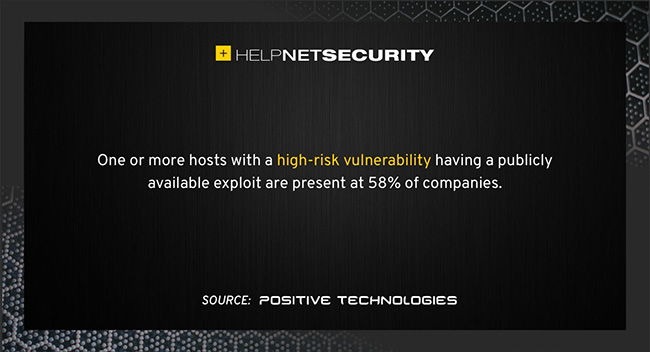 The results show the presence of high-risk vulnerabilities at most companies. However, half of these vulnerabilities can be eliminated by installing the latest software updates.

The detected vulnerabilities are caused by the absence of recent software updates, outdated algorithms and protocols, configuration flaws, mistakes in web application code, and accounts with weak and default passwords.

Vulnerabilities can be fixed by installing the latest software versions

As part of the automated security assessment of the network perimeter, 47% of detected vulnerabilities can be fixed by installing the latest software versions.

All companies had problems with keeping software up to date. At 42% of them, PT found software for which the developer had announced the end of life and stopped releasing security updates. The oldest vulnerability found in automated analysis was 16 years old.

Attackers can bruteforce weak passwords in a matter of minutes and then obtain access to network equipment with the privileges of the corresponding user before proceeding to develop the attack further.

“Our automated security assessment proved that all companies have network services available for connection on their network perimeter, allowing hackers to exploit software vulnerabilities and bruteforce credentials to these services.

Minimizing the number of services on the network perimeter is recommended

Kilyusheva continued: “At most of the companies, experts found accessible web services, remote administration interfaces, and email and file services on the network perimeter. Most companies also had external-facing resources with arbitrary code execution or privilege escalation vulnerabilities.

“With maximum privileges, attackers can edit and delete any information on the host, which creates a risk of DoS attacks. On web servers, these vulnerabilities may also lead to defacement, unauthorized database access, and attacks on clients. In addition, attackers can pivot to target other hosts on the network.

“We recommend minimizing the number of services on the network perimeter and making sure that accessible interfaces truly need to be available from the Internet. If this is the case, it is recommended to ensure that they are configured securely, and businesses install updates to patch any known vulnerabilities.

“Vulnerability management is a complex task that requires proper instrumental solutions,” Kilyusheva added. “With modern security analysis tools, companies can automate resource inventories and vulnerability searches, and also assess security policy compliance across the entire infrastructure. Automated scanning is only the first step toward achieving an acceptable level of security. To get a complete picture, it is vital to combine automated scanning with penetration testing. Subsequent steps should include verification, triage, and remediation of risks and their causes.”