Ransomware groups have realized that their tactics are also very effective for targeting larger enterprises, and this resulted in a 31% increase of the average ransom payment in Q3 2020 (reaching $233,817), ransomware IR provider Coveware shared in a recently released report.

They also warned that cases where the attackers exfiltrated data and asked for an additional ransom to delete it have doubled in the same period, but that paying up is a definite gamble.

“Despite some companies opting to pay threat actors to not release exfiltrated data, Coveware has seen a fraying of promises of the cybercriminals (if that is a thing) to delete the data,” they noted.

The data cannot be credibly deleted, it’s not secured and is often shared with other parties, they said. Various ransomware groups have posted the stolen data online despite having been paid to not release it or have demanded another payment at a later date.

“The track records are too short and evidence that defaults are selectively occurring is already collecting. Accordingly, we strongly advise all victims of data exfiltration to take the hard, but responsible steps. Those include getting the advice of competent privacy attorneys, performing an investigation into what data was taken, and performing the necessary notifications that result from that investigation and counsel.” 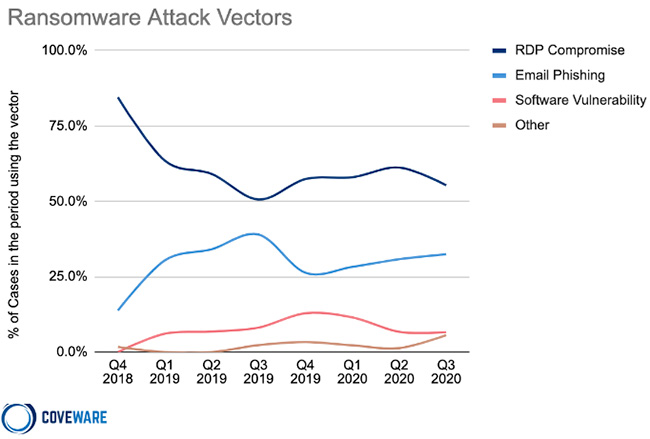 What’s interesting is that the “popularity” of RDP as an attack vector declines as the size of the target companies increases, bacuse larger companies are typically wise enough to secure it. The attackers must then switch to using more pricy means: RDP credentials can be purchased for less than $50, but email phishing campaigns and vulnerability exploits require more effort and time/money – even if they are performed by another attacker who then sells the access to the gang.

“The foothold created by the phishing email or CVE exploit is used to escalate privileges until the attacker can command a domain controller with senior administrative privileges. Once that occurs, the company is fully compromised and data exfiltration + ransomware are likely to transpire within hours or days,” they explained.

Companies/organizations in every industry can be a target, but attackers seem to prefer those in the professional services industry, healthcare and the public sector: 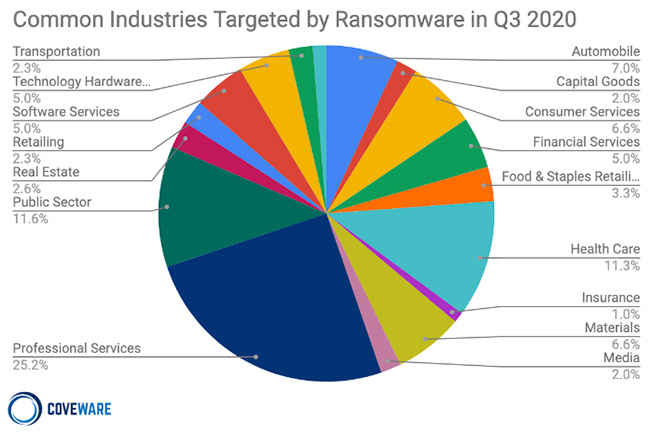