In 1555, Nostradamus published his famous Les Prophéties containing obfuscated prophecies for the world to come. Some believe that one of these predictions pertains to the year 2020 and it reads, in part: “The false trumpet concealing madness / will cause Byzantium to change its laws.” Yeah… I have no idea what that means either! 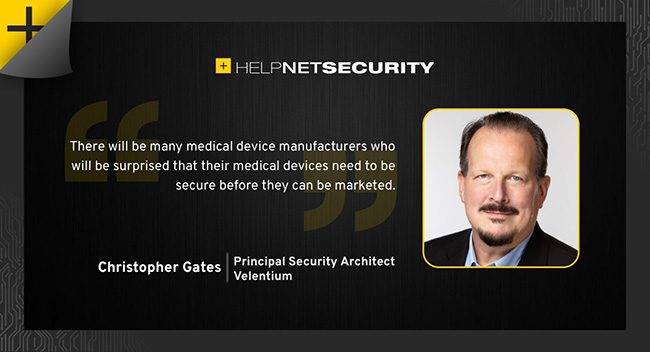 In 1966 the late Arthur C. Clarke, a famous science fiction writer, predicted that we would have flying houses and be able to relocate on a whim by 2001. Well, we missed that one!

I reference these earlier works of failed prognostication in an effort to set the bar low for my own predictions of changes to medical device cybersecurity in the coming year, 2021.

There are some easy predictions:

The big cybersecurity revelation of 2021

I probably don’t need to tell anyone who is reading this article that ransomware is big. Really big.

The days of a disaffected teenager sitting alone in his basement handcrafting “agents of encryption” are long gone. As reported by EMSISOFT Malware Lab, in 2020 the global revenue generated by ransomware attacks was estimated at between 6 and 25 billion dollars!

Ransomware is big business, and it is run like a big business. Ransomware-wielding criminals are only interested in maximizing profits by increasing their return on the initial investment.

This business has evolved and grown to accomplish this financial goal:

But businesses (aka “potential victims”) are also evolving to address the risks presented by ransomware, including more comprehensive backups, restoration, stronger authentication, detection, and training.

With the ransomware vendor’s viable attack surface shrinking due to their would-be victims’ mitigation efforts competing with their desire to increase profits year over year, what will the ransomware industry evolve into next?

I think I know. But I’m really, really hoping my prediction turns out to be just as inaccurate as Nostradamus’ and Arthur C. Clark’s. Here it is:

What industry has 10 to 15 million connected devices (in the US alone), has deep financial pockets, absolutely cannot have these devices unavailable for use, has tried to maximize profits by continuing to use old legacy devices for 15 to 20 years, cannot perform backups of these devices, does not have a time-effective means of updating a majority of the devices in the field, and cannot easily restore the essential performance of these devices if they are corrupted?

The answer is: the healthcare delivery industry. Everything I just described are characteristics of medical devices.

What has (probably) previously prevented this from happening is the sheer number of proprietary devices that, to all appearances, had little to no vulnerabilities in common with one another (unlike, for example, devices and systems using Windows-based PCs). But as we discover more vulnerabilities in commonly utilized third-party software components (TPSCs, aka SOUP – Software of Unknown Provenance), this will change. Think: Ripple/20, Amnesia:33, etc.

If a ransomware attacker can compromise multiple types of medical devices in a healthcare delivery organization (HDO), the attack could potentially take down all operations in that facility/organization.

Couple this with 2020’s rush by manufacturers to enable remote communications to medical devices for use on COVID-19 victims. How many of these remote-control systems were designed and implemented securely?

I think the hardest part of this is going to be how the HDO is ever going to completely recover from such an attack. Even in the scenario where the ransom is paid and the captured data and devices are restored by the attackers, how can any level of trust in the affected devices ever be re-established?

We are seeing something similar to this currently with the SolarWinds / SUNBURST attack: most recommendations for recovery are to wipe and re-create the infrastructure, including anything touched by SolarWinds Orion! Are hospitals prepared to take such an action? Are medical device manufacturers prepared to support them?

Fortunately, after 2017’s devastating WannaCry attack, HDOs started to demand more and better security for their infrastructures and the devices they purchase. Regulators worldwide are working to close the healthcare vulnerability gap. And medical device manufacturers are waking up and responding positively to these emerging market pressures.

As we work to secure future medical devices, my hope is that we can also retire and replace legacy devices that can’t be secured before another ransomware catastrophe occurs in healthcare. The resources medical device manufacturers need – information, training, best practices, expert guidance – are available. The question is: will they seek out and take advantage of those resources in time?

I sincerely hope so. Let’s make 2021 the year we proved my disaster prediction wrong, reversed the trends and mistakes of the past, and successfully secured the future of healthcare.