Out with the old, in with MACH. That’s what a poll of global IT leaders found regarding their plans to revamp, or retain, their enterprise architectures. 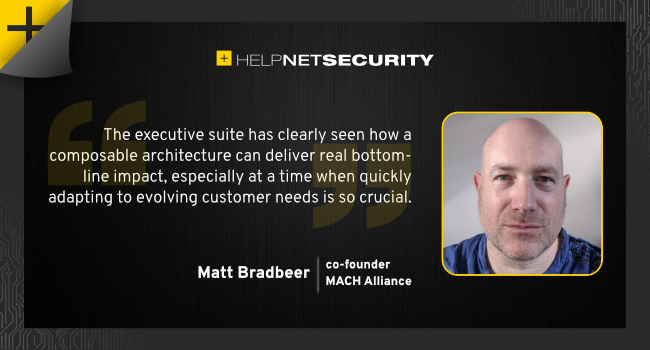 Eighty-one percent of respondents expressed the strong intention to increase MACH elements in their front-office architecture in the next 12-months.

Geographically, those in the U.S. indicated the greatest emphasis on this strong intention (U.S.-based respondents: 59% vs. Germany-based respondents: 27%, for example). This is largely in response to the time and cost burden businesses face when needing to manage upgrades that come with the incumbent systems.

The painful cost of upgrades (hint: it’s not only budgetary)

The research made it clear that upgrades are putting a strain on budgets. A quarter of IT decision makers surveyed said they spend over half of their IT budget on front-office upgrades.

But it’s not only about pressure on the budget. Upgrades are distracting IT teams from innovating, and that comes at a cost, too. Respondents said their teams spend an average of 40% of their time delivering front-office upgrades. That represents a huge portion of time that should be dedicated to innovation and improving customer experience – but isn’t.

Improving CX is the largest driver in urging IT leaders to further explore MACH: 63% of respondents said customer experience is the main driver of their transition to a modern MACH infrastructure, while 57% noted the ability to innovate faster and 55% noted the desire to improve competitive advantage as their top drivers.

C-Suite drives the shift to composable

Ninety-four percent of those surveyed who hold c-suite titles said they would not maintain the status quo in the future regarding their intention to increase MACH investment.

“We’re extremely encouraged to see that c-level executives are driving the adoption of MACH across their organizations,” said Matt Bradbeer, MACH Alliance co-founder.

“The executive suite has clearly seen how a composable architecture can deliver real bottom-line impact, especially at a time when quickly adapting to evolving customer needs is so crucial. This modern approach allows a degree of flexibility, performance and cost savings we’ve not seen before.”

IT team resistance to change is the main barrier to moving to a MACH front-office infrastructure, according to respondents. Forty percent noted this as the top barrier within their organizations, followed by the length of time between making the initial investment and seeing long-term benefits, and dependence on current vendor for business continuity (tied for the second most commonly chosen option at 31%).

“We know there’s still trust in the age-old way of doing things,” said MACH Alliance President, Kelly Goetsch. “A new architectural approach means re-thinking and re-learning how things get done, and that takes a willingness to embrace change. That’s a big part of why the MACH Alliance exists – not only to advocate for this approach, but to counsel companies on how to go about bringing it into their own enterprise.

“Moving to a new digital maturity model is not a small undertaking, but it’s worth it. And once the shift is made, things are easier going forward, for good.”