The U.S. technology sector has now recorded employment growth in each of the past five months, according to analysis by CompTIA. 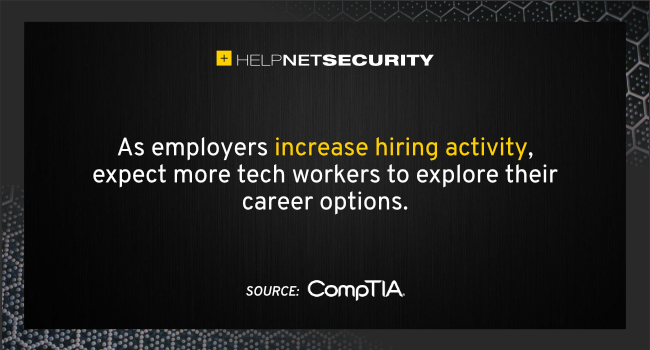 Technology companies added 16,600 jobs in April, a combination of technical and non-technical positions, the report data reveals. So far in 2021 tech industry companies have added 60,900 workers.

Employers across all sectors of the economy reduced their hiring of IT workers by an estimated 234,000 positions. This was the first decline after four consecutive months of employment gains. For the year IT occupation employment has increased by 72,000 positions.

Employer job postings for open IT positions held steady in April, increasing by a modest 1,690 over March, totaling nearly 309,000.

“As employers increase hiring activity, expect more tech workers to explore their career options,” said Tim Herbert, executive VP for research and market intelligence at CompTIA. “In a competitive labor market, companies will need to be even more diligent in their approach to work practices and corporate culture in retaining tech talent.”

Employment growth by region and industries

The latest job posting data shows that California, Texas, Colorado, Arizona and Florida had the largest month over month increase in IT job postings. Phoenix, Denver, Los Angeles, Dallas and Sacramento had the strongest performance among metropolitan areas.