Venafi announced the findings of a global survey that evaluates the impact of software supply chain attacks like SolarWinds/SUNBURST, CodeCov and Kaseya/REvil on how development organizations are changing their approach to securing software build and delivery environments. 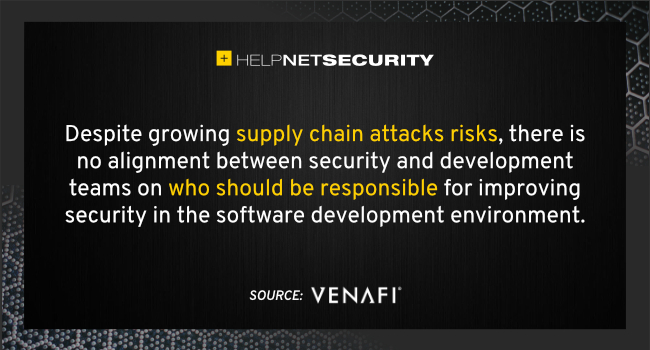 The survey evaluated the opinions of over 1,000 information security professionals, developers and executives in the IT and software development industries.

Misalignemnt between security and development teams

According to the survey, respondents nearly unanimously agree (97%) that the techniques and procedures used to attack the SolarWinds software development environment will be reused in new attacks this year.

“While the SUNBURST attack on SolarWinds was not the first of its kind, it was certainly one of the most serious so far,” said Kevin Bocek, VP of security strategy and threat intelligence at Venafi.

“SUNBURST made it absolutely clear that every organization must take urgent, substantive actions to change the way we secure software build pipelines. The only way to reduce these risks is to dramatically improve the security of the development pipeline and the software it delivers. However, if we can’t even agree on who is responsible for taking these actions it’s pretty clear that we aren’t even close to making meaningful changes. Anyone hoping this problem has been addressed is kidding themselves.”

Confidence and responsibility in the software development environment

“As these survey results clearly show, most organizations have not made it clear which team has the incentive or the directives they need to make the changes required. The only way to minimize the risk of future attacks is to enable developers to move fast, from idea to production, without compromising security,” Bocek continued.

“Speed of innovation and security are inseparable in software development. In the same way a Formula 1 engineer builds for performance and safety at the same time, software developers also need to be accountable for both. To accomplish this, developers clearly need help and support from security teams. Boards, CEOs, and managing directors need to take action to ensure clear lines of ownership so changes are in place, and they can hold teams accountable.”