While IT security decision makers often consider cyberattacks a serious concern and are allocating a significant share of their IT budget to address their cybersecurity challenges, data breaches have still been uncomfortably commonplace, an INTRUSION survey reveals. 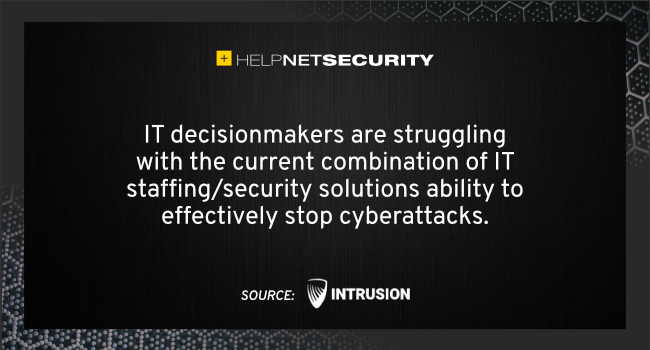 Cybersecurity IT budget vs. breaches

Data breaches are too commonplace despite allocating significant portions of their IT budget to cybersecurity.

Significant cyberattack concerns often remain even with formal response plans and the combination of staff and solutions being considered effective.

Inside vs. outside threats

The survey addresses internal and external threats and reveals a sentiment of false security given the occurrences of data breaches.

Data breaches continue despite significant IT budget allocations for cybersecurity

The survey findings demonstrate that IT decision makers are struggling with the current combination of IT staffing/security solutions ability to effectively stop cyberattacks.

“Virtually every day we wake up to a new headline of a successful cyberattack impacting every facet of our lives,” said INTRUSION Chief Evangelist Gary Davis.

“If you’re in charge of IT security at any sized company, getting a good night’s sleep may be a problem. With leaders fretting over the effectiveness of their teams and technologies things could get dramatically worse as those asked to work at home during the COVID-19 pandemic make their way back to the office with all their devices.”

Continued Davis, “with 52% of IT/security decision-makers reporting a data breach at their organization sometime in the past, we feel that those at the tip of the spear for their IT security can and should feel confident that they can effectively protect their company from being tomorrow’s headline.”