A KPMG survey reveals a deep disconnect between corporate data practices and the general population’s expectations around transparency and data privacy. As companies collect more personal data, survey respondents are increasingly concerned about how their data is being used and report concerns about the level of data collection. 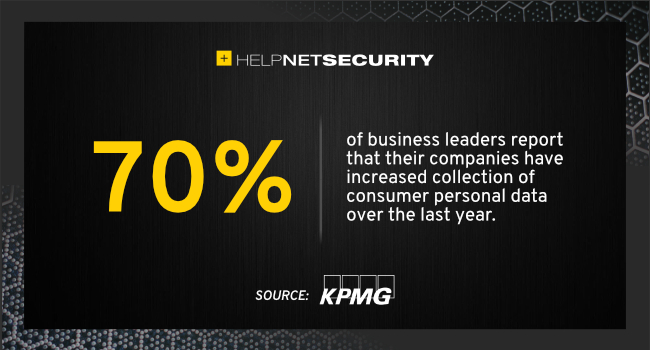 KPMG’s survey confirms that data collection is rising, with 70% of the business leaders surveyed reporting that their companies have increased collection of consumer personal data over the last year. At the same time, survey respondents characterized as general population report feeling increasingly uneasy about these practices, with 86% of respondents saying data privacy is a growing concern for them and 68% saying that the level of data collection by companies is concerning.

“This split between business and consumer sentiment isn’t new, but its persistence shows that businesses have a long way to go to make the public more comfortable with how they are collecting, using and safeguarding data,” says Orson Lucas, KPMG U.S. Privacy Services leader. “Failure to bridge this divide could present a real risk of losing access to the valuable data and insights that drive business growth.”

Respondents wary of how businesses use their data

General population respondents are worried about how their data is being used by organizations, and many of these concerns are grounded in a fundamental lack of trust. The survey found that:

“People tend to underreport behaviors that place them or their organization in a negative light,” says Lucas. “Having more than one in four report that their business sometimes uses unethical data collection methods is troubling and helps explain why consumers are wary.”

To bridge this gap, enterprises must prioritize data protection and take meaningful action to build consumer trust. Approximately 62% of business leaders say their companies should be doing more to strengthen existing data protection measures. 88% of the general population respondents also say they want corporations to take the lead in establishing corporate data responsibility.

Businesses should consider ways to be more explicit and transparent about how consumer data will be used. 76% of general population respondents say they want more transparency about how their personal data is being used by companies, and 40% say they would willingly share their personal data if they knew exactly who would use it and how it would be used. Right now, only 53% of business leaders say their company shows how such data will be used.

“These technologies can help organizations build greater visibility into their data practices, from better data tracking to helping ensure integrity and fairness throughout the life cycle.”