Business investment in SaaS applications continues to climb despite widespread underutilization of app licenses by employees. 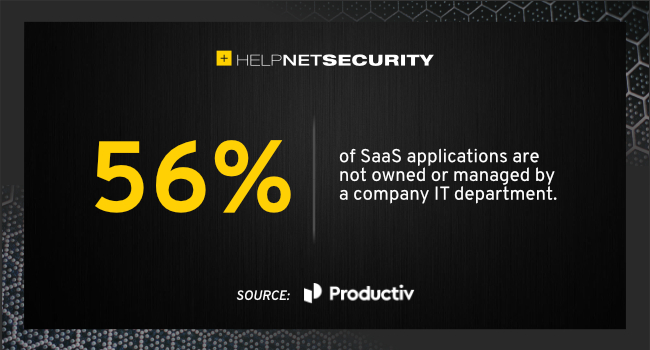 According to Productiv’s report, on average only 45% of company apps are being used on a regular basis. The data also shows 56% of all apps are Shadow IT, or owned and managed outside of IT.

The SaaS market has been growing ever since Amazon built the first public cloud and is projected by Gartner to be nearly $140B by 2022.

SaaS tools became even more critical in 2020 as remote and hybrid work skyrocketed and tools like Zoom and Slack became essential for team collaboration and communication. But the rapid growth of SaaS can lead to SaaS sprawl, and every SaaS purchase outside of IT has the potential to expand a company’s security risk and create fragmentation that prevents employees from doing their best work.

SaaS sprawl can also drastically impact business spend: using too many team-owned tools can lead to unregulated budgets and an increased cost of ownership due to situations like missed renewals.

“No company is saying they intend to have less SaaS in the future,” said Jody Shapiro, CEO of Productiv. “Our new report reveals many businesses may have a much larger blind spot than they realize when it comes to their SaaS portfolio. CIOs and IT teams need to understand the complete picture of apps they have, what value their employees are getting out of those apps and how those apps affect their security and compliance standards.”

According to the data, the average company has a whopping 254 SaaS apps (with enterprises averaging 364 apps). However, the average app engagement over 60 days was 45%, revealing that less than half of licensed employees are regularly using the apps available to them.

Interestingly, tools purchased outside of IT had a higher average percentage of engagement at 54%. This indicates that employees are finding more value in the tools they select for themselves.

Most departments now have 40-60 tools each, yet cross-functional apps dominate

The report findings show the majority of teams have between 40 and 60 apps, with a few outliers. The Security, Engineering and IT departments lead in average number of apps, with 78, 77 and 61 apps, respectively. Productiv also looked at how different departments use top function-specific apps.

The data reveals Atlassian’s software suite is a top-used tool across 11 departments. Other function-specific apps like DocuSign, Zendesk and Lucidchart also appeared as top apps across multiple teams.

Most apps have 3 or fewer security certifications, SSO use is high

Analysis found 83% of tools were compliant with less than half of the 7 most common certifications. Shadow IT had fewer certifications on average compared to apps managed by IT.

SSO is a key tool organizations are using to provide governance and access control, and more than half of all IT-managed apps are behind SSO. Enterprises with more than 2,000 employees had the highest SSO coverage across their apps, which may be the result of more robust security protocols.

The report found that 56% of SaaS applications are not owned or managed by a company IT department. This data suggests that employees as well as individual business units are directly purchasing or signing up for tools on their own.

Small organizations have the highest percentage of sprawl, possibly because they grow more quickly, with faster-evolving SaaS portfolios. The new data found the following breakdown of Shadow IT by business size: