The latest report from the WatchGuard shows an astonishing 91.5% of malware arriving over encrypted connections during Q2 2021. This is a dramatic increase over the previous quarter and means that any organization that isn’t examining encrypted HTTPS traffic at the perimeter is missing 9/10 of all malware. 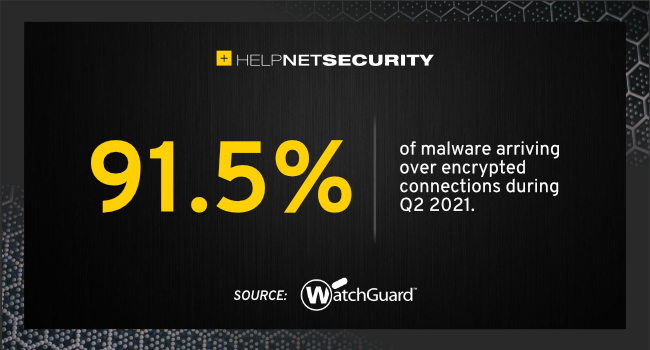 “With much of the world still firmly operating in a mobile or hybrid workforce model, the traditional network perimeter doesn’t always factor into the cybersecurity defence equation,” said Corey Nachreiner, CSO at WatchGuard.

“While a strong perimeter defence is still an important part of a layered security approach, strong endpoint protection (EPP) and endpoint detection and response (EDR) is increasingly essential.”

AMSI.Disable.A showed up in the top malware section for the first time in Q1 and immediately shot up for this quarter, hitting the list at #2 overall by volume and taking the #1 spot for overall encrypted threats. This malware family uses PowerShell tools to exploit various vulnerabilities in Windows but what makes it especially interesting is its evasive technique.

In just the first six months of 2021, malware detections originating from scripting engines like PowerShell have already reached 80% of last year’s total script-initiated attack volume, which itself represented a substantial increase over the year prior. At its current rate, 2021 fileless malware detections are on track to double in volume YoY.

Network attacks are booming despite the shift to primarily remote workforces

WatchGuard appliances detected a substantial increase in network attacks, which rose by 22% over the previous quarter and reached the highest volume since early 2018. Q1 saw nearly 4.1 million network attacks.

In the quarter that followed, that number jumped by another million – charting an aggressive course that highlights the growing importance of maintaining perimeter security alongside user-focused protections.

Ransomware attacks back with a vengeance

While total ransomware detections on the endpoint were on a downward trajectory from 2018 through 2020, that trend broke in the first half of 2021, as the six-month total finished just shy of the full-year total for 2020.

If daily ransomware detections remain flat through the rest of 2021, this year’s volume will reach an increase of over 150% compared to 2020.

The Colonial Pipeline attack on May 7, 2021 made it abundantly and frighteningly clear that ransomware as a threat is here to stay. As the quarter’s top security incident, the breach underscores how cybercriminals are not only putting the most vital services – such as hospitals, industrial control, and infrastructure – in their cross hairs, but appear to be ramping up attacks against these high-value targets as well.

Deviating from the usual one to two new signatures seen in previous quarterly reports, there were four brand new signatures among WatchGuard’s top 10 network attacks for Q2.

Notably, the most recent was a 2020 vulnerability in popular web scripting language PHP, but the other three aren’t new at all. These include a 20ll Oracle GlassFish Server vulnerability, a 2013 SQL injection flaw in medical records application OpenEMR, and a 2017 remote code execution (RCE) vulnerability in Microsoft Edge. While dated, all still pose risks if left unpatched.

Q2 saw one new addition to the 10 most-widespread network attacks list, and it made its debut at the very top. The signature, 1133630, is the 2017 RCE vulnerability mentioned above that affects Microsoft browsers.

Though it may be an old exploit and patched in most systems (hopefully), those that have yet to patch are in for a rude awakening if an attacker is able to get to it before they do. In fact, a very similar high-severity RCE security flaw, tracked as CVE-2021-40444, made headlines earlier this month when it was actively exploited in targeted attacks against Microsoft Office and Office 365 on Windows 10 computers.

Office-based threats continue to be popular when it comes to malware, which is why we’re still spotting these tried-and-true attacks in the wild. Fortunately, they’re still being detected by tried-and-true IPS defences.

There was an increase in the use of malware recently targeting Microsoft Exchange servers and generic email users to download remote access trojans (RATs) in highly sensitive locations. This is most likely due to Q2 being the second consecutive quarter that remote workers and learners returned to either hybrid offices and academic environments or previously normal behaviours of on-site activity.

In any event – or location – strong security awareness and monitoring of outgoing communications on devices that aren’t necessarily connected directly to the connected devices is advised.