Zscaler announced the release of a report that tracked and analyzed over 20 billion threats blocked over HTTPS, a protocol originally designed for secure communication over networks. This year’s study found an increase of more than 314 percent year-over-year across geographical areas that include APAC, Europe, and North America, underscoring the need for a zero trust security model and greater traffic inspection than most companies can achieve with legacy firewall-based security models. 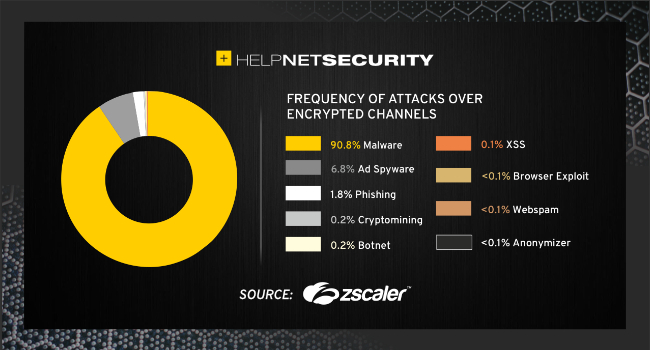 Seven of the industries in the study experienced higher attack rates from threats in SSL and TLS traffic, while last year’s most-targeted industry, healthcare, saw a decrease of 27 percent since January 2021. Conversely, the technology industry was plagued by threats at a rate much higher than other types of businesses, accounting for 50 percent of attacks.

In today’s enterprise, more than 80 percent of internet-bound traffic is encrypted, which means that enterprises face the unique challenge of enforcing consistent security for all of their remote users. Cybercriminals are increasingly sophisticated in their tactics, and they’re using encrypted channels at various stages of malware and ransomware attacks.

“Most enterprise IT and security teams recognize this reality but often struggle to implement SSL/TLS inspection policies due to a lack of compute resources and/or privacy concerns,” said Deepen Desai, CISO and VP Security Research and Operations at Zscaler.

“As a result, encrypted channels create a significant blind spot in their security postures. The report on the state of encrypted attacks demonstrates that the most effective way to prevent encrypted attacks is with a scalable, cloud-based proxy architecture to inspect all encrypted traffic, which is essential to a holistic zero trust security strategy.”

Cybercrime at an all-time high

Between January 2021 and September 2021, Zscaler blocked more than 20 billion threats over HTTPS, increasing more than 314 percent from the previous year. Cybercriminals are getting increasingly savvy with their attacks and have benefited from affiliated networks and malware-as-a-service tools available on the dark web.

While cybercriminals can use various attack types to hide in encrypted traffic, malicious content represented a staggering 91 percent of attacks, a 212 percent increase over last year. In contrast, cryptomining malware is down 20 percent, reflecting a broader shift in the attack trends, with ransomware becoming a more lucrative option.

As more retailers offer digital shopping options during the 2021 holiday shopping season, cybercriminals are expected to be targeting more ecommerce solutions and digital payment platforms with malware and ransomware attacks. This has been exacerbated by the sudden need to support remote workers with remote connectivity to teleconferencing, SaaS-based apps, and public cloud workloads.

Tech companies are also an attractive target due to their role in the supply chain. A successful supply-chain attack like Kaseya and SolarWinds can give attackers access to a trove of user information.

Additionally, as the world begins its return to normal, and as businesses and public events are opening up around the globe, many employees are still working in relatively insecure environments. Getting access to critical point-of-sale systems is extremely attractive to cybercriminals as it opens the door to huge profits.

After being a top target in 2020, attacks on healthcare organizations decreased by 27 percent in 2021. Similarly, attacks on government organizations decreased by 10 percent. Ransomware attacks that targeted critical services, including the Colonial Pipeline attack and the ransomware attack on the Health Services Executive of Ireland, have caught the attention of the highest levels of law enforcement, including the White House, which recently signed an Executive Order to improve the nation’s cybersecurity.

“After being the two most frequently targeted sectors in 2020, healthcare and government organizations had an immense sense of urgency to revamp their security postures with modern architectures, which are largely based on zero trust. There was also increased government scrutiny and a law enforcement crackdown on cybercriminal groups in response to high-profile attacks against critical services such as Colonial Pipeline,” said Desai. “As a result of these two factors, we have seen a decrease in attacks on healthcare and government organizations this year.”

Attacks were observed in over 200 countries and territories worldwide, including small countries that are not common targets such as islands across the Caribbean. In addition, an increase in work-from-anywhere has led to employees branching out from the usual giant tech hubs like, the San Francisco Bay Area, New York, London, Paris, Sydney.

As organizations shift to support new, digitally enabled working models, it’s increasingly important to ensure that their assets and traffic to those assets are secure. To lower the threat from encrypted attacks, a zero trust security strategy is recommended, which allows organizations to: