A research study by Skybox Security found that 83% of organizations suffered an operational technology (OT) cybersecurity breach in the prior 36 months. The research also uncovered that organizations underestimate the risk of a cyberattack, with 73% of CIOs and CISOs “highly confident” their organizations will not suffer an OT breach in the next year. 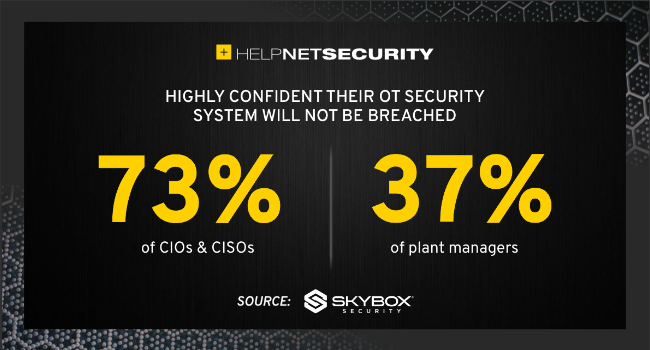 “Not only do enterprises rely on OT, the public at large relies on this technology for vital services including energy and water. Unfortunately, cybercriminals are all too aware that critical infrastructure security is generally weak. As a result, threat actors believe ransomware attacks on OT are highly likely to pay off,” said Skybox Security CEO Gidi Cohen. “Just as evil thrives on apathy, ransomware attacks will continue to exploit OT vulnerabilities as long as inaction persists.”

Organizations underestimate the risk of a cyberattack

Fifty-six percent of all respondents were “highly confident” their organization will not experience an OT breach in the next year. Yet, 83% also said they had at least one OT security breach in the prior 36 months. Despite the criticality of these facilities, the security practices in place are often weak or nonexistent.

CISO disconnect between perception and reality

Seventy-three percent of CIOs and CISOs are highly confident their OT security system will not be breached in the next year. Compared to only 37% of plant managers, who have more firsthand experiences with the repercussion of attacks. While some refuse to believe their OT systems are vulnerable, others say the next breach is around the corner.

Compliance does not equal security

To date, compliance standards have proven insufficient in preventing security incidents. Maintaining compliance with regulations and requirements was the most common top concern of all respondents. Regulatory compliance requirements will continue to increase in light of recent attacks on critical infrastructure.

Seventy-eight percent said complexity due to multivendor technologies is a challenge in securing their OT environment. In addition, 39% of all respondents said that a top barrier to improving security programs is decisions are made in individual business units with no central oversight.

Cyber liability insurance is considered sufficient by some

CIOs, CISOs, Architects, Engineers, and Plant Managers all list functional silos among their top challenges in securing OT infrastructure. Managing OT security is a team sport. If the team members are using different playbooks, they are unlikely to win together.

Supply chain and third-party risk is a major threat

Forty percent of respondents said that supply chain/third-party access to the network is one of the top three highest security risks. Yet, only 46% said their organization as a third-party access policy that applied to OT. 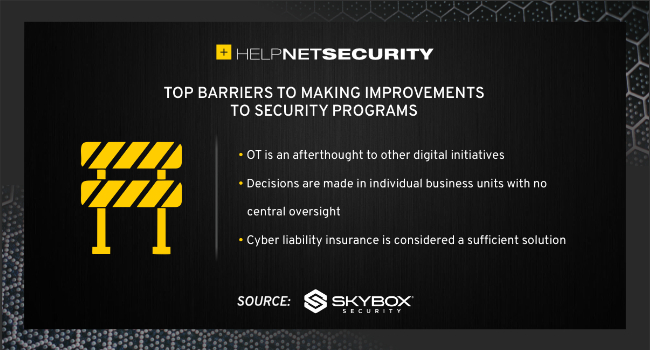 Navistar, Information Security Manager Robert Lynch: “Some CISOs could have false confidence because even though they’ve already been breached, they have not identified this yet; sometimes hackers are there for a long period establishing their foothold. It is dangerous to be confident as the bad guys are so good.”

Skybox Security Research Lab Threat Intelligence Lead Sivan Nir: “Our threat intelligence shows that new vulnerabilities in OT were up 46% versus the first half of 2020. Despite the rise in vulnerabilities and recent attacks, many security teams do not make OT security a corporate priority. Why? One of the surprising findings is that some security team personnel deny they are vulnerable yet admit to being breached. The belief that their infrastructure is safe — despite evidence to the contrary — has led to inadequate OT security measures.”