Already since summer 2020, the encryption software Boxcryptor offers additional security for data in Microsoft Teams. Now there is a major update that brings new features. 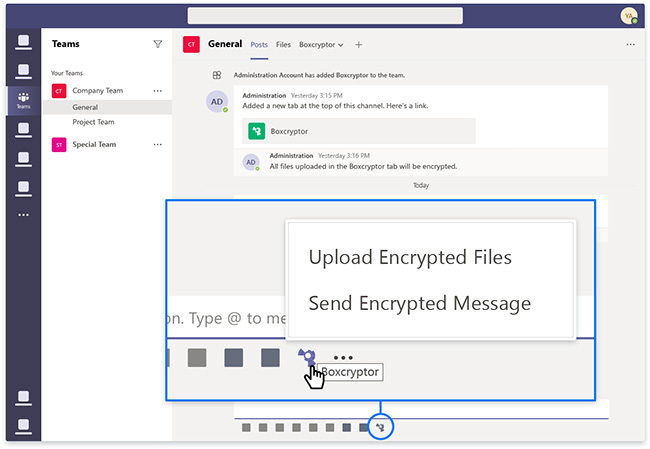 Among other things, users can send messages in end-to-end encrypted form. Passwords, bank data, any messages with sensitive content: Thanks to encryption by Boxcryptor in Microsoft Teams, it will not end up in the wrong hands and is secured in a GDPR-compliant manner.

Numerous companies, educational institutions, and organizations use Microsoft Teams as a collaboration tool. At the same time, the demand for a solution like Boxcryptor that reliably protects business data in Microsoft Teams also increased last year, especially due to the Corona pandemic.

After all, only consistent end-to-end encryption ensures that authorized people have exclusive access. If you do not want potential hackers or even Microsoft employees to gain insight into confidential data, you have to encrypt data and not let the key out of your hands during the entire process.

What Boxcryptor for Microsoft Teams can do

So far, Boxcryptor could be used in two ways in Microsoft Teams, as a personal app and in the team channels. Via the personal app, there is the possibility to access encrypted data in the personal OneDrive. In a team, Boxcryptor is available as a channel app. All members of the channel can request access to encrypted files in a channel and collaborate on these documents. Files can also be posted in channels – securely encrypted, of course.

These enhancements and new features are available now

Encrypted messages: Anyone who wanted to share confidential information or personal data in Microsoft Teams — and was previously unable to do so in a secure way — can now easily send the information in a message, encrypted with Boxcryptor. This ensures that only authorized persons have access to sensitive information.

Application for mobile devices as well as in the browser: Apart from Windows and macOS, Boxcryptor for Microsoft Teams is now also available on iOS and Android, and in the browser version. Therefore, encrypted files can now be shared and accessed on all major platforms.

Encrypted files in private channels: Another new feature that many Boxcryptor customers have already been waiting for is the ability to work with encrypted data in private channels and chats as well. The way it works for users is the same as in the “public” channels.