LzLabs announced the results of its latest global survey, conducted by Vanson Bourne, revealing that the desire to migrate, modernize and embrace cloud for critical mainframe applications is rapidly increasing amongst global IT decision makers. 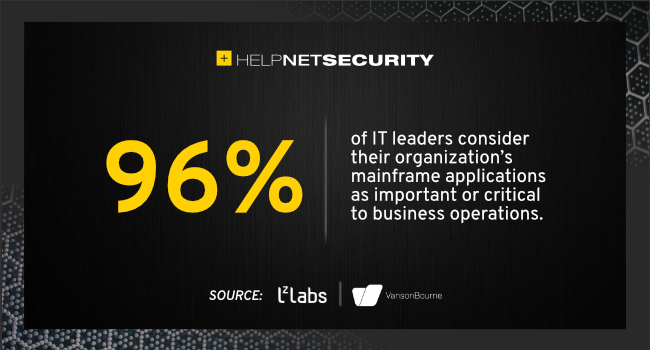 96% of respondents to the survey consider their organization’s mainframe applications as important or critical to business operations. At the same time, 98% report they would consider migrating their application assets off the platform completely.

The survey of 650 IT leaders globally has confirmed that the trend of new IT modernization options being performed off the mainframe is continuing, with organizations seeking to reduce system breaks between applications on legacy platforms and those on open systems and the cloud.

Post-pandemic digitization initiatives have spurred on IT modernisation, with 71% of organizations reporting to be going through or having been through an IT modernization process, compared to 64% in 2019 and 61% in 2018.

Underpinning this rise is the increasing need for companies to be able to embrace change to remain competitive. 87% of survey respondents agreed that quicker changes to applications can improve time to market for products. However, 90% believe it is difficult to change mainframe applications when supporting innovation objectives.

Worryingly, 67% of decision makers believe their organization’s mainframe holds them back in their innovation journey, and 58% reported being concerned that their business could lose its competitive advantage due to the failure of IT to keep pace with business demands.

The good news is that IT decision makers now have a much clearer view of what they want to achieve with their mainframe assets, and how to get there. Respondents cited better ability to leverage cloud (52%), increase speed of application development and testing (44%), and freedom of choice over which platform vendor to use (33%) as key advantages of migrating applications off the mainframe.

88% of global IT leaders surveyed also reported that they are concerned about the skills gap between experienced and junior members of their mainframe teams, emphasizing the urgent need for modernization initiatives which allow for the transfer of critical knowledge from mainframe professionals to junior colleagues.

Encouragingly, 80% of respondents stated that if applications written in legacy languages could be placed into a modern development environment, their organization’s new generation of developers could learn to manage them.

On this topic, 88% of decision makers agree that mainframe specialists remain important, even as their organization modernizes. 97% are interested in further training for their mainframe workforce in order to manage and maintain mainframe applications in cloud/open system environments.

The survey results did however underscore the urgent need to act now, with 56% of respondents stating that their organization has not properly implemented a succession plan for younger employees to absorb the knowledge required to maintain legacy mainframe architectures.

Organizations are overwhelmingly choosing the cloud as a target environment for mainframe workloads, emphasizing the growing recognition of cloud environments as a viable platform to grow and transform critical IT assets.

Cloud now has the highest proportion of IT modernization development occurring and has seen a substantial rise since 2018 (47% in 2021 vs 32% in 2019 and 27% in 2018). Furthermore, 82% of respondents say they would use public and/or hybrid cloud deployment models if they were to move their organization’s applications off the mainframe.

“It is encouraging to see a much greater awareness of the benefits of unlocking these critical mainframe applications, but procrastinating on these projects is no longer an option. Organizations must embrace change to remain competitive and facilitate the transfer of critical mainframe knowledge to the new technical workforce of tomorrow.”