Amid the COVID-19 crisis, the global market for cloud identity access and management (IAM) estimated at $5.3 billion in the year 2022, is projected to reach a revised size of $13.6 billion by 2026, growing at a CAGR of 26.7% over the analysis period, according to Global Industry Analysts. 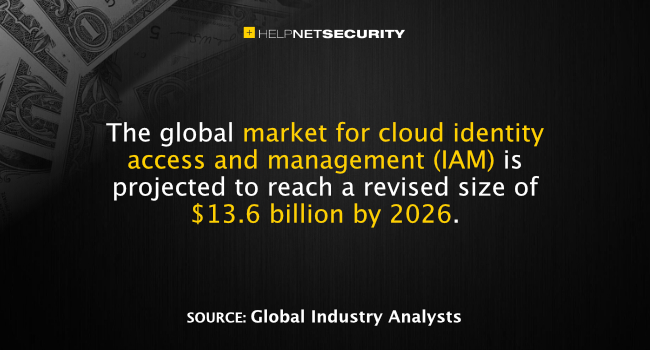 User Provisioning, one of the segments analyzed in the report, is projected to grow at a 27.3% CAGR to reach $7 billion by the end of the analysis period. After a thorough analysis of the business implications of the pandemic and its induced economic crisis, growth in the Single Sign-on segment is readjusted to a revised 28.6% CAGR for the next 7-year period. This segment currently accounts for a 16.2% share of the global cloud identity access and management (IAM) market.

Identity and access management (IAM) in enterprise IT networks refers to the management of access privileges for individuals operating on a network. IAM also deals with specifying and managing the scenarios in which privileges need to be granted or denied to a user. The users can be customers or employees. IAM systems primarily operate by creating a single digital identity for each individual, which is subsequently maintained, monitored and modified throughout the access lifecycle of the user.

Growth in the global market is attributed to the many benefits offered by cloud IAM, including compliance management and centralized security management among others. Increasing cases of cyber fraud also increases relevance of cloud IAM. Market growth is also fueled by the growing BYOD (bring you own device) trend in countries around the world. Growing demand for a cost-effective, flexible and scalable IAM had increased the popularity of cloud-hosted IAM in the recent years.

Increasing SaaS models adoption by small and medium businesses (SMBs), growing prominence of two factor or multi-factor authorization, and a considerably large need for provision and removal of access to users on a constant basis constitute the other major factors contributing towards market growth.

The U.S. and China cloud identity and IAM market by 2026

The cloud identity access and management (IAM) market in the U.S. is estimated at $2.1 billion in the year 2022. The country currently accounts for a 40.58% share in the global market. China, the world’s second largest economy, is forecast to reach an estimated market size of $1.7 billion in the year 2026 trailing a CAGR of 30.8% through the analysis period.

North America constitutes the major regional market for cloud IAM solutions due to the well-developed economies, higher adoption of sophisticated technologies such as IoT and IP-based devices, higher mobile phone penetration, and increasing digital crime and cyber-attack cases among others.

High growth over the coming years however, is expected to be reported in China and Asia-Pacific. In the Asia-Pacific and in many European markets, increased deployment of cloud-based IAM solutions is anticipated across newer end-user industries such as media and entertainment, sports and government.

Increased focus on data governance in the North American and European markets bodes well for IAM solution providers. In the EU, the recent GDPR was mainly created to strength data security across EU while in the US, companies are being expected to increase focus on data security and governance, especially with regard to sensitive data. Organizations in countries across the world are also realizing the importance of enhanced security solutions requiring decision based identity assurance. Such systems look out for threat warnings allowing organizations track suspicious activities.

The systems allow organizations to add extra security layers. In the global governance & compliance management segment, USA, Canada, Japan, China and Europe will drive the 23.4% CAGR estimated for this segment. These regional markets accounting for a combined market size of $298.9 million will reach a projected size of $1.4 billion by the close of the analysis period. China will remain among the fastest growing in this cluster of regional markets. Led by countries such as Australia, India, and South Korea, the market in Asia-Pacific is forecast to reach $188.7 million by the year 2026.