As business workforces become increasingly distributed, IT leaders say it’s harder than ever to defend against firmware attacks, according to HP Wolf Security. 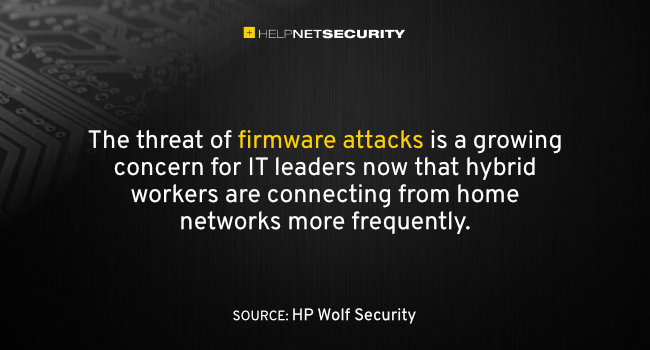 The shift to hybrid work models has transformed how organizations manage endpoint security, while also highlighting new challenges for IT teams around securing device firmware. The HP Wolf Security global survey of 1,100 IT leaders reveals that:

Managing firmware security is becoming harder and taking longer in the era of hybrid work, leaving organizations exposed: More than two-thirds (67%) of IT leaders say protecting against, detecting, and recovering from firmware attacks has become more difficult and time-consuming due to the increase in home working, with 64% saying the same of analyzing the security of firmware configuration. As a result, 80% of IT leaders are worried about their capacity to respond to endpoint firmware attacks.

“Firmware attacks are very disruptive and much harder to detect or remediate than your typical malware – often requiring expert and even manual intervention to fix. This increases the cost and complexity of remediation considerably, particularly in hybrid environments where devices are not on site for IT teams to access. Having more endpoints sitting outside of the protection of the corporate network also reduces visibility and increases exposure to attacks coming in via unsecured networks,” said Dr. Ian Pratt, Global Head of Security for Personal Systems at HP.

“At the same time, we are seeing a rise in destructive attacks – such as wiper malware. Last year, our research team saw attackers conducting reconnaissance on firmware configurations, with the likely intent of exploiting unsecured configurations to weaponize for financial gain. Once an attacker has gained control over the firmware configuration, they can exploit their position to gain persistence and hide from anti-malware solutions that live in the OS. This gives them an advantage, allowing them to stealthily maintain persistence on target devices, so they can gain access to infrastructure across the enterprise and maximize their impact.”

Despite the clear risks that destructive firmware attacks pose to organizations, device security is not always a major consideration in the hardware procurement process, with many organizations continuing to use technologies that are not built with security in mind. This issue is being exacerbated by the new shadow IT whereby employees are purchasing and connecting devices outside of IT purview while working remotely.

HP Wolf Security’s Out of Mind and Out of Sight report found that 68% of office workers that purchased devices to support remote work said security wasn’t a major consideration in their purchasing decision. Furthermore, 43% didn’t have their new laptop or PC checked or installed by IT or security.

Boris Balacheff, Chief Technologist for Security Research and Innovation at HP Labs comments: “Security must become part of the procurement process when purchasing new IT devices. Organizations need to play the long game, because the devices you procure today will be the environment you have to manage and protect tomorrow. State-of-the-art device security delivers protection for firmware against malware as well as physical tampering, with detection both below and above the OS and autonomous self-healing recovery from the hardware up – but this will only help address the issue for organizations that know to ask the right questions when they procure new devices.”

HP warns that one of the key issues that businesses face is that many organizations are still reliant on legacy devices that were built to older industry standards, where design for manageable security and resilience at scale was not a focus for hardware and firmware design. This is leaving a gap in enterprise security that could take years to close.

Balacheff concludes: “As attackers continue to invest in the capability to attack and disrupt PCs and other OT and IoT devices at the firmware level, organizations also need to learn how to monitor the state of the art in device security to keep updating procurement security requirements accordingly. This is what will enable leading organizations to stay ahead of emerging threats and protect, detect and remediate firmware attacks at scale in the era of hybrid work.”