Remember when the popular but totally useless security app named Virus Shield appeared for sale on Google Play and netted its creators over $40,000 before being removed from the online market? Well, the app has been resurrected, and this time the targets are Windows Phone users.

Virus Shield is not the only useless app that this “developer” offers to users, says Kaspersky Lab expert Roman Unuchek. Other fake mobile AV apps misusing the names and icons on several AV manufacturers (including Kaspersky) are also for sale, as are fake versions of most popular browsers, games, note-taking apps, etc.: 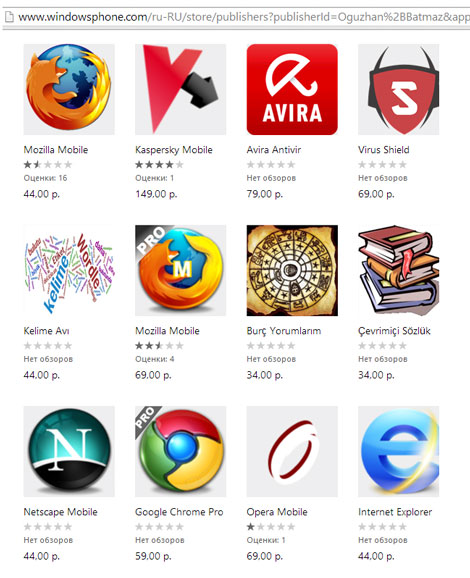 The prices for the apps are not that high – from 149 to 34 rubles (approximately $4,30 – $0,99) – but are definitely preposterous when you know that the apps only pretend to do what they are supposed to.

“This is a good example of how one successful scam spawns numerous clones. Instead of just one fake AV, the scammers offer dozens of fake apps, copying the design, but not the functionality of the original,” Unuchek notes, adding that, unlike with most fake AV, these creators immediately start making money and don’t have to demand payments from users to remove bogus malware from the device.

“The second fake app of note that we discovered was for sale on Google Play and was called Kaspersky Anti-Virus 2014,” he also shared. “Just to clarify, there is no Kaspersky Lab mobile product by that name. The screenshot used on the page of the fake app was simply copied from the official Kaspersky Internet Security for Android page.”

The app is priced at 142 rubles (a little over $4), and does not even simulate a scan of the device – it simply states occasionally that some malware has been detected.

“It is quite possible that more and more of these fake apps will start appearing. One thing is for sure – the mechanisms put in place by the official stores are clearly unable to combat scams like this,” concludes Unuchek.