The growing use of cloud services and the lack of visibility into sensitive information in the cloud can result in more damaging or costly data breaches, according to the Ponemon Institute. The survey found that the majority of enterprises have not or do not know if they inspect their cloud services for malware.

What are the cloud security risks your organization worries about? 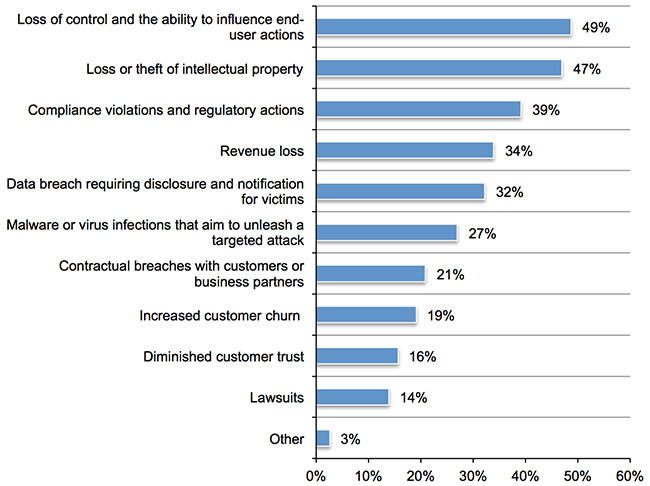 The findings also reveal that while 49 percent of business applications are now stored in the cloud, fewer than half of them are known, officially sanctioned or approved by IT. While respondents understand the risk of data breaches, nearly a quarter could not determine if they had been breached, and nearly a third couldn’t determine what types of data were lost in the breach(es).

Over half of respondents say the use of cloud services significantly increases the likelihood of a data breach, yet the majority have neither the visibility nor have they taken the correct precautions to prevent breaches involving cloud.

A look at the cloud environment

Cloud adoption is on the rise. A recent forecast from 451 Research predicts that three in five (60 percent) of enterprise workloads will run in the cloud by mid-2018, up from two in five (41 percent) today. This report found that as more software and business applications move to the cloud, knowledge about what applications are in the cloud decreases, putting confidential and sensitive information at risk.

The economic impact of data breaches

Companies were asked to estimate the cost of data breaches involving the loss of 100,000 or more customer records within the last 12 months. They calculated a customer information breach would have cost them almost $20 million in the past year, taking into consideration the cost of remediation and technical support, lost business opportunities, and lost productivity because of downtime.

Respondents were asked to estimate the likelihood of a data breach when considering a number of IT scenarios involving an increased use of the cloud. The growing use of cloud services (SaaS) and the increase in backup and storage of confidential data in the cloud is most likely to cause a data breach in the cloud: