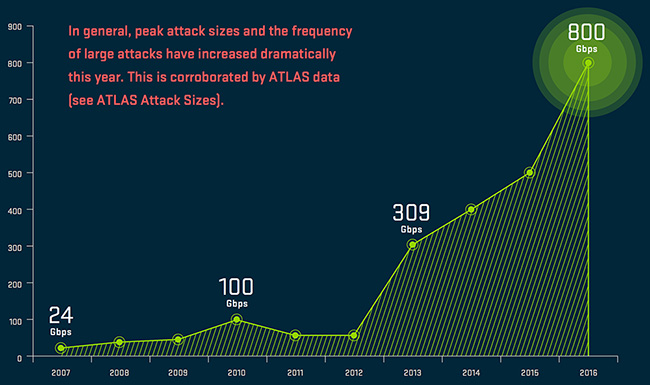 The stakes have changed for network and security teams. The threat landscape has been transformed by the emergence of IoT botnets. As IoT devices proliferate across networks, bringing tremendous benefits to businesses and consumers, attackers are able to weaponize them due to inherent security vulnerabilities.

The largest DDoS attack reported this year was 800 Gbps, a 60% increase over 2015’s largest attack of 500 Gbps. Not only are DDoS attacks getting larger, but they are also becoming more frequent and complex. This increased scale and complexity has led more businesses to deploy purpose-built DDoS protection solutions, implement best practice hybrid defenses and increase time for incident response practice – all positive developments in an otherwise gloomy threat environment.

“The survey respondents have grown accustomed to a constantly evolving threat environment with steady increases in attack size and complexity over the past decade,” said Darren Anstee, Arbor Networks Chief Security Technologist. “However, IoT botnets are a game changer because of the numbers involved. There are billions of these devices deployed, and they are being easily weaponized to launch massive attacks. Increasing concern over the threat environment is reflected in the survey results, which show significant improvements in the deployment of best practice technologies and response processes.”

The emergence of botnets that exploit inherent security weaknesses in IoT devices and the release of the Mirai botnet source code have increased attackers’ abilities to launch extremely large attacks.

The massive growth in attack size has been driven by increased attack activity on all reflection/amplification protocols, and by the weaponization of IoT devices and the emergence of IoT botnets:

The chances of being hit by a DDoS attack have never been higher, with respondents showing increased rates of attack:

Multiple simultaneous attack vectors are increasingly being used to target different aspects of a victim’s infrastructure at the same time. These multi-vector attacks are popular because they can be difficult to defend against and are often highly effective, driving home the need for an agile, multi-layer defense.

67% of service providers and 40% of Enterprise, Government and Education (EGE) reported seeing multi-vector attacks on their networks. 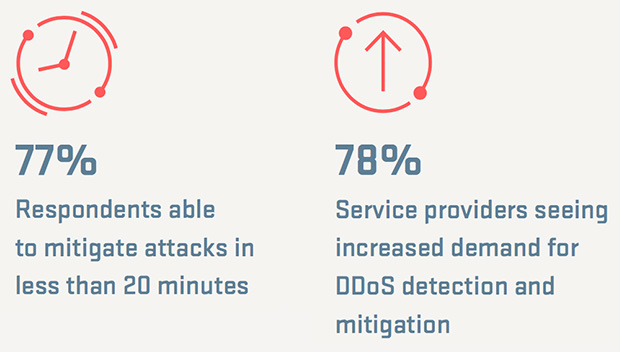 DDoS attacks have successfully made many leading web properties unreachable – costing thousands, sometimes millions, of dollars in revenue. This has led the C-suite and company boards to make DDoS defense a top priority:

This year’s survey results indicate a better understanding of the brand damage and operational expense of successful DDoS attacks, driving focus on best-practice defensive strategies. Across the board, in every industry, there has been an increase in the use of purpose-built DDoS protection solutions and best practice methods.