Costly cyber attacks are having a significant and growing financial impact on businesses worldwide. According to Accenture and the Ponemon Institute, in 2017 the average cost of cyber crime globally climbed to $11.7 million per organization, a 23 percent increase from $9.5 million reported in 2016, and represents a staggering 62 percent increase in the last five years. 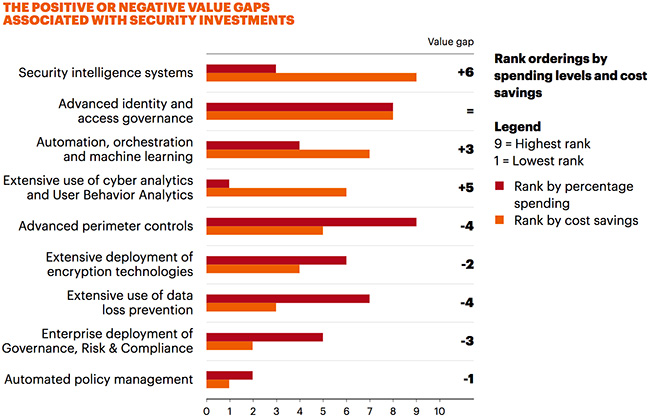 Companies in the United States incurred the highest total average cost per crime at $21.22 million while Germany experienced the most significant increase in total cyber crime costs from $8.44 million to $11.15 million. This surge follows a recent string of infamous malware attacks including WannaCry and Petya, which cost several global firms hundreds of millions of dollars in lost revenues.

Cyber attacks are not slowing down

The “Cost of Cyber Crime Study” surveyed 2,182 security and IT professionals in 254 organizations worldwide and found that the number of cyber attacks has shown no sign of slowing down since the Ponemon Institute began the research in 2009. Key findings of the study include the following:

“The costly and devastating consequences businesses are suffering, as a result of cyber crime, highlights the growing importance of strategically planning and closely monitoring security investments. As this research shows, making wise investments in innovation can certainly help make a significant difference when cyber criminals strike,” said Kelly Bissell, managing director of Accenture Security. “Keeping pace with these more sophisticated and highly motivated attacks demands that organizations adopt a dynamic, nimble security strategy that builds resilience from the inside out – versus only focusing on the perimeter – with an industry-specific approach that protects the entire value chain, end-to-end.”

Security technology spending out of balance

Of the nine security technologies evaluated, the highest percentage spend was on advanced perimeter controls, yet companies deploying these security solutions only realized an operational cost savings of $1 million associated with identifying and remediating cyber attacks, suggesting possible inefficiencies in the allocation of resources.

Among the most effective categories in reducing losses from cyber crime are security intelligence systems, defined as tools that ingest intelligence from various sources that help companies identify and prioritize internal and external threats. They delivered substantial cost savings of $2.8 million, higher than all other technology types included in this study. Automation, orchestration and machine learning technologies were only deployed by 28 percent of organizations – the lowest of the technologies surveyed – yet provided the third highest cost savings for security technologies overall at $2.2 million.

Researchers considered four main impacts on organizations that suffered a cyber attack: business disruption, loss of information, loss of revenue and damage to equipment. The most damaging of those today is loss of information, mentioned by 43 percent of organizations represented in the study. In contrast, the cost of business disruption, such as business process failures following an attack, has decreased from 39 percent in 2015 to 33 percent in this year’s research.

“The foundation of a strong and effective security program is to identify and ‘harden’ the most-high value assets,” said Dr. Larry Ponemon, chairman and founder of the Ponemon Institute. “While steady progress has been made in improving cyber defense, a better understanding of the cost of cyber crime could help businesses bridge the gap between their own vulnerabilities and the escalating creativity—and numbers—of threat actors.”

Australia reports the lowest total average cost from a cyber attack at $5.41 million, while the United Kingdom had the lowest change over the last year from $6.58 million to $8.74 million. Japan experienced a 22 percent increase in costs to $10.46 million – the third highest increase of the countries in the survey.

Costs also vary considerably by the type of cyber attack. U.S. companies are spending more to resolve all types of cyber attacks, especially for malware and Web-based attacks ($3.82 million and $3.40 million per incident, respectively).

By taking the following three steps, organizations can further improve the effectiveness of their cybersecurity efforts to fend off and reduce the impact of cyber crime:

1. Build cybersecurity on a strong foundation: invest in the ‘brilliant basics’ such as security intelligence and advanced access management and yet recognize the need to innovate to stay ahead of hackers.