SonicWall recorded 9.32 billion malware attacks in 2017 and saw more than 12,500 new Common Vulnerabilities and Exposures (CVE) reported for the year.

“The cyber arms race affects every government, business, organization and individual. It cannot be won by any one of us,” said SonicWall CEO Bill Conner. “Our latest proprietary data and findings show a series of strategic attacks and countermeasures as the cyber arms race continues to escalate. By sharing actionable intelligence, we collectively improve our business and security postures against today’s most malicious threats and criminals.”

The annual threat report frames, compares and contrasts advances made by both cybersecurity professionals and global cybercriminals.

“The risks to business, privacy and related data grow by the day — so much so that cybersecurity is outranking some of the more traditional business risks and concerns,” said Conner.

Web traffic encrypted by SSL/TLS standards made yet another significant jump in 2017. This shift has already given more opportunity for cybercriminals and threat actors to hide malicious payloads in encrypted traffic.

With most browsers dropping support of Adobe Flash, no critical flash vulnerabilities were discovered in 2017. That, however, hasn’t deterred threat actors from attempting new strategies. 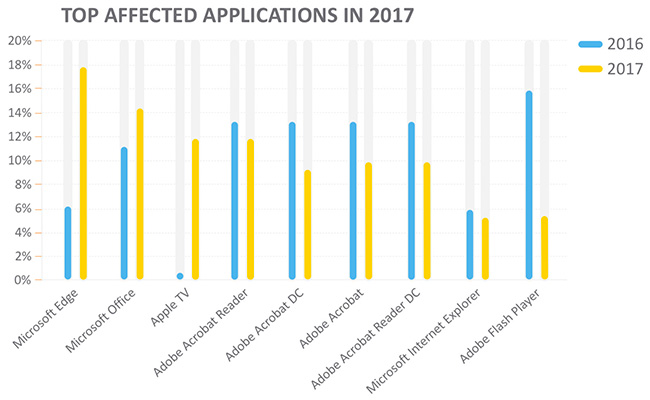 “Stabilizing the cyber arms race requires the responsible, transparent and agile collaboration between governments, law enforcement and the private sector,” said the Honorable Michael Chertoff, Chairman of the Chertoff Group, and former U.S. Secretary of Homeland Security. “Like we witnessed in 2017, joint efforts deliver a hard-hitting impact to cybercriminals and threat actors. This diligence helps disrupt the development and deployment of advanced exploits and payloads, and also deters future criminals from engaging in malicious activity against well-meaning organizations, governments, businesses and individuals.”

Unique types of ransomware found in the wild

While the total volume of ransomware attacks was down significantly year over year, the number of ransomware variants created continues an upward trend since 2015. The variant increase, coupled with the associated volume of 184 million attacks, leaves ransomware a prevelant threat.