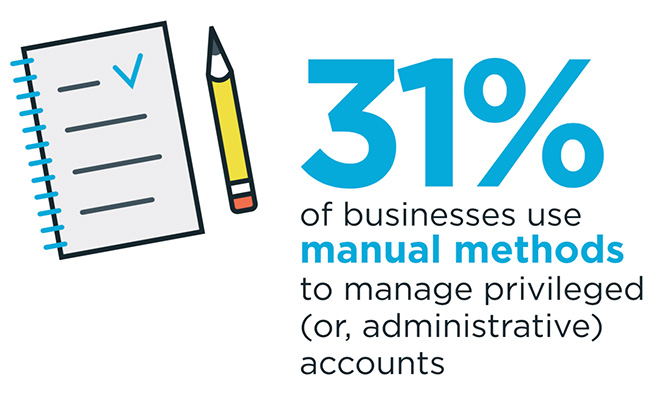 Among the survey’s most surprising findings are that nearly one-third of organizations are using manual methods or spreadsheets to manage privileged account credentials, and one in 20 IT security professionals admit they have no way of knowing if a user is fully deprovisioned when they leave the company or change their role. Additionally, a single password reset takes more than 30 minutes to complete in nearly 1 in 10 IT environments.

These and other findings paint a bleak picture of how many organizations approach IAM and PAM programs, indicating that critical sensitive systems and data are not properly protected, user productivity is hindered, and potential threats from mismanaged access remain a major challenge.

In addition to 31 percent of businesses using manual administrative account management methods, a surprising 1 in 25 organizations do not manage administrative accounts at all. Two thirds (66 percent) grant privileged account access to third-party partners, contractors or vendors; and 75 percent admit IT security professionals share privileged passwords with their peers at least sometimes, with one in four admitting this is usually or always the case.

Ineffective administrative account management practices coupled with careless sharing of passwords governing of these accounts demonstrates major gaps in PAM programs across the board, and IT security professionals seem to be aware of their shortcomings. The survey found that only 13 percent of respondents are completely confident in their PAM programs, while more than 1 in 5 (22 percent) are not confident at all.

The research found that 68 percent of users’ password resets take five minutes or longer to unlock, with nearly 1 in 10 (9 percent) admitting the task takes more than 30 minutes, implying widespread hindrance to employee productivity. When it comes to new user provisioning, 44 percent of organizations take from several days to multiple weeks to provide access across all applications and systems needed.

Worse, nearly one-third (32 percent) of IT organizations take somewhere between several days to multiple weeks to deprovision former users from all of the applications and systems they were granted access to, with one in 20 having no way to know if the user has been fully deprovisioned at all. While the majority of respondents rate all aspects of their access control program as excellent or fair, only 15 percent are completely confident that they will not be hacked due to an access control issue.

When asked to share their worst IAM nightmare, the most common answer (at 27 percent) was a disgruntled employee sharing sensitive information, followed by having their CIO interviewed on TV following an IAM-cause data breach (22 percent) and usernames and passwords being posted to the dark web (18 percent). Ironically, nearly 8 in 10 (77 percent) of the IT security professionals polled admitted that it would be easy for them to steal sensitive information if they were to leave their organization, with 12 percent admitting they would do if they were mad or upset enough. 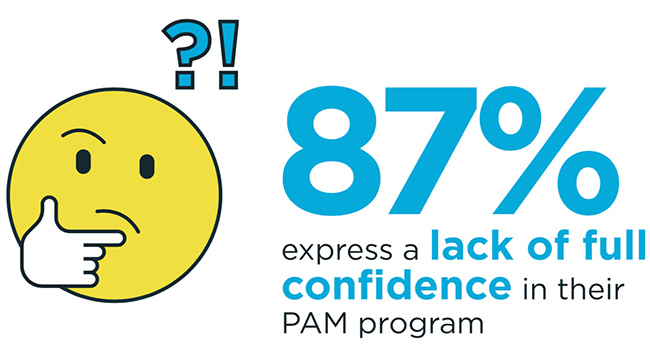 Stealing user credentials is one of the easiest ways for malicious actors to gain entry into an organization’s network. Among the most coveted accounts are privileged (administrative) accounts, which may grant virtually unlimited access to a company’s IT infrastructure, including its most critical and sensitive systems and data. The more accounts available to bad actors, the more damage can potentially be done, including data breaches and leakage, compliance violations, fines and loss of brand-trust and reputation.

“Our research revealed a number of shocking findings including extensive sharing of privileged passwords internally and externally, failure to immediately deprovision old user accounts, and spending upwards of 30 minutes to reset a password. These poor practices are incredibly real and concerning risks to any organization, so it’s no surprise that there is a general lack of confidence in the effectiveness of IAM and PAM programs,” said John Milburn, president and general manager of One Identity. “The fact of the matter is that organizations that fail to address these basic IAM and PAM best practices may not only expose themselves to significant security risks, but also drive business productivity down. This research should serve as a wake-up call to organizations to seek out ways to ensure, manage, and secure appropriate access across the entire organization and user population – end users, third parties and administrators.”