As the world adapts to GDPR and puts more attention on personal privacy and security, Europe’s top information security professionals still have doubts about the industry’s ability to protect critical infrastructure, corporate networks, and personal information.

Is GDPR worth the effort?

While respondents noted that the GDPR, implemented in May, is top of mind, there is an emerging lack of confidence in its potential effectiveness. There is no doubt changes have been made to comply with GDPR – a solid 70% confirm they have dedicated resources to GDPR initiatives. However, interestingly enough, only more than a third say they’re confident in their organization’s state of GDPR compliance. And among those who think GDPR could potentially help privacy efforts, fewer than one in four believe that help will be substantial.

What is the greatest threat to Europeans’ personal information protection?

Nearly 60% of respondents cited collection and/or sale of personal information by enterprises and social media organizations that don’t properly protect privacy as the biggest danger to personal data. These concerns have driven more than 40% of information security professionals to plan to minimize their own social media usage, and many are advising their users and business units to do the same.

65% of security professionals believe that a major attack on critical infrastructure spanning multiple European countries will occur in the next two years. This figure indicates that concerns over such an attack have not ebbed since last year’s survey. A chief concern appears to be cyber threats from large nation-states such as Russia and China: 30% believe large nation states are the greatest threat – followed by 17% citing financially motivated, organized criminals. 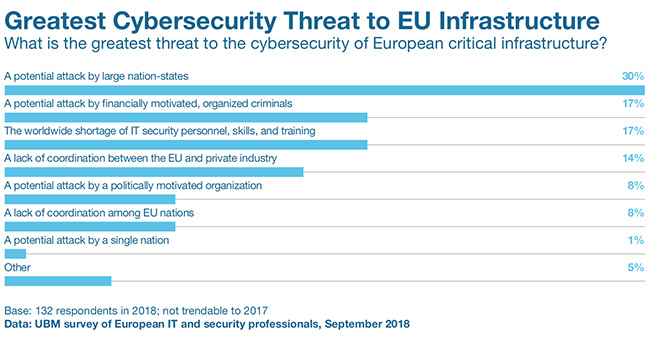 Why are European cybersecurity teams so doubtful about their defenses?

Europe’s weak defenses still relate to lack of funds, unequipped professionals and ineffective technology. 42% of respondents believe the weakest link in their defenses are end users who violate security policy and are too easily fooled by social engineering attacks. Meanwhile, 20% blame a skills shortage for failed IT security strategies, and less than half think they have enough budget to defend against today’s threats.