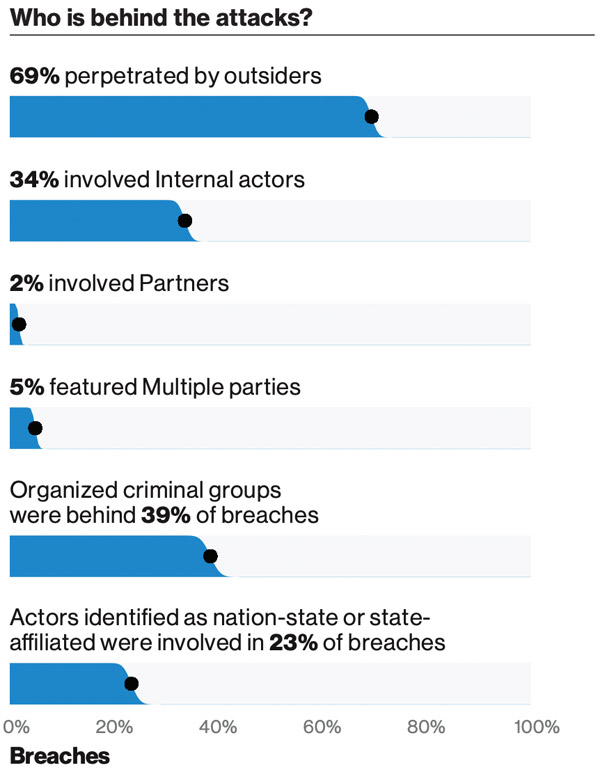 Financially-motivated social engineering attacks (12 percent of all data breaches analyzed) are a key topic in this year’s report, highlighting the critical need to ensure ALL levels of employees are made aware of the potential impact of cybercrime.

“Technical IT hygiene and network security are table stakes when it comes to reducing risk. It all begins with understanding your risk posture and the threat landscape, so you can develop and action a solid plan to protect your business against the reality of cybercrime.”

A successful pretexting attack on senior executives can reap large dividends as a result of their – often unchallenged – approval authority, and privileged access into critical systems. Typically time-starved and under pressure to deliver, senior executives quickly review and click on emails prior to moving on to the next (or have assistants managing email on their behalf), making suspicious emails more likely to get through.

The increasing success of social attacks such as business email compromises, can be linked to the unhealthy combination of a stressful business environment combined with a lack of focused education on the risks of cybercrime.

“A well-timed email from the CEO can get employees to share sensitive financial information while stolen credentials from this group grant them access to most of a company’s sensitive information. The majority of these attacks are coming via BEC attacks which is why businesses need to use a holistic approach to email security that identifies, addresses, and reinforces business processes vulnerable to phishing. Traditional reactive detection methods used by most legacy email security tools are failing, and companies are putting their most senior executives at risk if they fail to adapt to adequately protect against advanced email threats,” Kevin O’Brien, CEO, GreatHorn, told Help Net Security.

This year’s findings also highlight how the growing trend to share and store information within cost-effective cloud based solutions is exposing companies to additional security risks. Analysis found that there was a substantial shift towards compromise of cloud-based email accounts via the use of stolen credentials. In addition, publishing errors in the cloud are increasing year-over-year. Misconfiguration (“Miscellaneous Errors”) led to a number of massive, cloud-based file storage breaches, exposing at least 60 million records analyzed in the DBIR dataset. This accounts for 21 percent of breaches caused by errors.

Bryan Sartin, executive director of security professional services at Verizon comments, “As businesses embrace new digital ways of working, many are unaware of the new security risks to which they may be exposed. They really need access to cyber detection tools to gain access to a daily view of their security posture, supported with statistics on the latest cyber threats. Security needs to be seen as a flexible and smart strategic asset that constantly delivers to the businesses, and impacts the bottom line.” 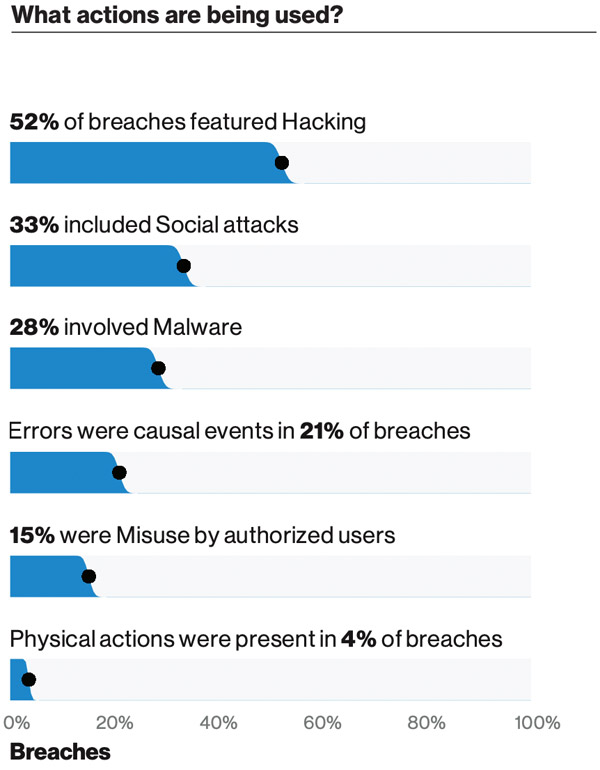 New analysis from FBI Internet Crime Complaint Center (IC3): Provides insightful analysis of the impact of Business Email Compromises (BECs) and Computer Data Breaches (CDBs). The findings highlight how BECs can be remedied. When the IC3 Recovery Asset Team acts upon BECs, and works with the destination bank, half of all US-based business email compromises had 99 percent of the money recovered or frozen; and only 9 percent had nothing recovered.

Ransomware attacks are still going strong: They account for nearly 24 percent of incidents where malware was used. Ransomware has become so commonplace that it is less frequently mentioned in the specialized media unless there is a high profile target.

Media-hyped crypto-mining attacks were hardly existent: These types of attacks were not listed in the top 10 malware varieties, and only accounted for roughly 2 percent of incidents. 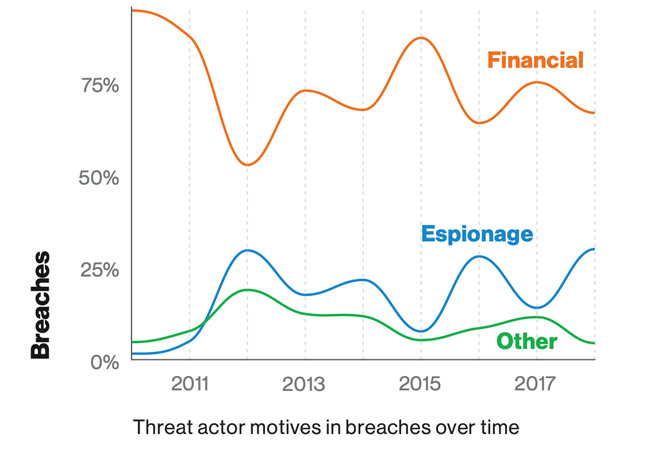 Putting business sectors under the microscope

Once again, this year’s report highlights the biggest threats faced by individual industries, and also offers guidance on what companies can do to mitigate against these risks.

“Every year we analyze data and alert companies as to the latest cybercriminal trends in order for them to refocus their security strategies and proactively protect their businesses from cyber threats. However, even though we see specific targets and attack locations change, ultimately the tactics used by the criminals remain the same. There is an urgent need for businesses – large and small – to put the security of their business and protection of customer data first. Often even basic security practices and common sense deter cybercrime,” comments Sartin.

Industry findings of note include:

Educational Services: There was a noticeable shift towards financially motivated crime (80 percent). 35 percent of all breaches were due to human error and approximately a quarter of breaches arose from web application attacks, most of which were attributable to the use of stolen credentials used to access cloud-based email.

Healthcare: This business sector continues to be the only industry to show a greater number of insider compared to external attacks (60 versus 42 percent respectively). Unsurprisingly, medical data is 18x more likely to be compromised in this industry, and when an internal actor is involved, is it 14x more likely to be a medical professional such as a doctor or nurse.

Manufacturing: For the second year in a row, financially motivated attacks outnumber cyber-espionage as the main reason for breaches in manufacturing, and this year by a more significant percentage (68 percent).

Public Sector: Cyber espionage rose this year – however, nearly 47 percent of breaches were only discovered years after the initial attack.

Retail: Since 2015, Point of Sale (PoS) breaches have decreased by a factor of 10, while Web Application breaches are now 13x more likely.