Mac threats growing faster than their Windows counterparts for the first time ever, with nearly twice as many Mac threats detected per endpoint as Windows threats, according to Malwarebytes. 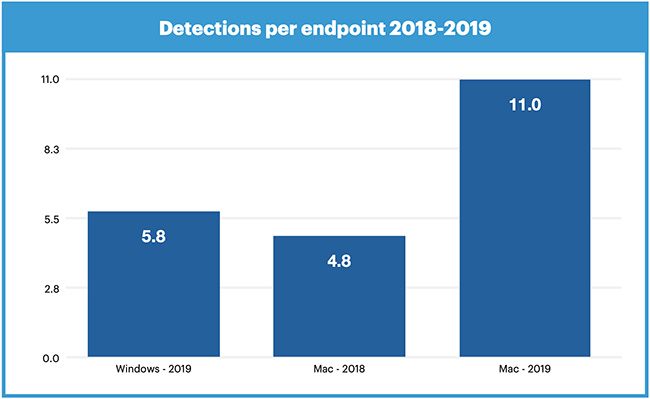 In addition, cybercriminals continue to focus on business targets with a diversification of threat types and attack strategies in 2019.

Emotet and TrickBot were back in 2019

Trojan-turned-botnets Emotet and TrickBot made a return in 2019 to target organizations alongside new ransomware families, such as Ryuk, Sodinokibi and Phobos.

“A rise in pre-installed malware, adware and multi-vector attacks signals that threat actors are becoming more creative and increasingly persistent with their campaigns,” said Marcin Kleczynski, CEO of Malwarebytes.

“It is imperative that, as an industry, we continue to raise the bar in defending against these sophisticated attacks, actively protecting both users and businesses by flagging and blocking all programs that may violate their privacy, infect their devices, or even turn the infrastructure they depend on against them.”

Mac threats are growing, other threats in the spotlight

Mac threats significantly ramp up – An average of 11 threats per Mac endpoint were detected in 2019—nearly double the average of 5.8 threats per endpoint on Windows. Overall Mac threats increased by more than 400 percent, year-over-year.

HackTools triumph – With consumer detections of HackTools up 42 percent, this is a threat to watch in 2020, bolstered by families such as MimiKatz, which also targeted businesses.

Dynamic duo does damage – TrickBot and Emotet once again reigned globally, targeting businesses heavily in the last year. Emotet was second-most detected threat against businesses in 2019. 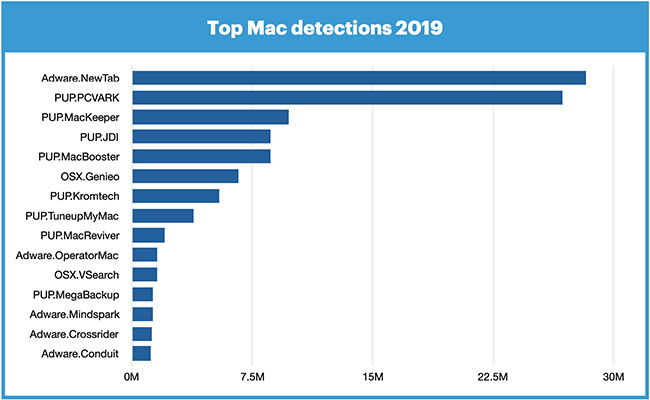 Ransomware is rampant – Ransomware targeted cities, schools and healthcare organizations with increased vigor in 2019. Newer ransomware families saw the highest growth, with Ryuk business detections up by 543 percent, year-over-year, and Sodinokibi increasing by 820 percent since its introduction in May 2019.

Beware of adware – Adware increased 13 percent, year-over-year, for consumers and 463 percent for businesses. Seven of the 10 top consumer threat families were adware variants, as well as five of the top 10 business threat families.

These auto installers ship with Android devices and are used to update the phone’s firmware—but they also take and sell personal information.

Just keep skimming – Credit card skimmers, or Magecart, were one of the most prevalent web threats in 2019. Magecart activity will continue in 2020 with more e-commerce platforms targeted.

Key targets shift – The services sector leapfrogged over education and retail, snagging the top spot for industries impacted by threats in 2019. Notably this includes managed service providers (MSPs), which are being leveraged to take advantage of their network of clients.