Cybersecurity has emerged as the top focus of upstream oil and gas companies’ digital investments, according to a report from Accenture. 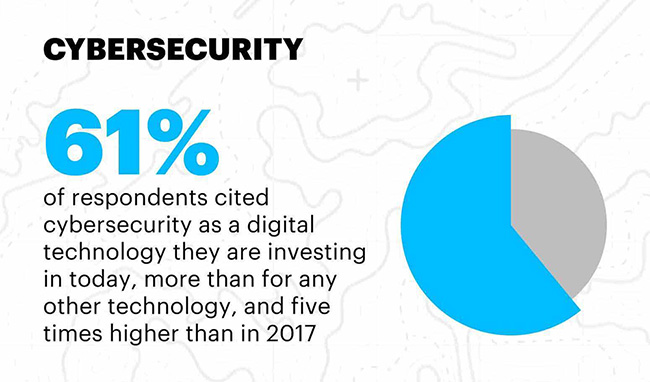 The report is based on a global survey of 255 industry professionals, including C-suite executives, functional leaders and engineers.

When respondents were asked which digital technologies their organizations are investing in today, cybersecurity was cited more than any other, by 61% of respondents – five times higher than the 12% who made that claim in 2017. The report suggests that the focus on cyber resilience is increasing sharply as oil companies seek to protect their assets and reputations.

Cybersecurity was also cited by more respondents (16%) than any other digital solutions when asked which were driving the greatest impact in terms of business performance, up from 9% in 2017.

“Managing attacks isn’t just a matter of protecting reputation, share price and operations, but it’s part of a greater responsibility for national services and security.

“Upstream businesses must continue to invest thoughtfully and substantially in cybersecurity measures, as they often underestimate their exposure to such attacks, which are also increasing in technical complexity.”

The report suggests that oil and gas companies are still investing heavily in cloud technologies because they are a foundation for their digital transformational journeys and for greater operational security.

Additionally, the percentage of respondents who cited artificial intelligence (AI) as driving the greatest business performance impact more than doubled from 2017, from 4% to 9%.

47% of respondents cited a loss of competitive advantage as the biggest risk of a lack of investment in digital, with 42% citing cost reduction as the most significant business challenge that digital can help address.

Broadly however, the rate of digital investment by upstream companies has remained almost the same over the last few years. For instance, the number of executives who said their companies plan to invest more or significantly more in digital technologies over the next three to five years – 72% – was relatively unchanged from the number of who responded similarly to the same question in the 2017 survey (71%).

The report reveals that upstream oil and gas companies are finding it hard to scale digital initiatives. Only 9% of respondents reported that their department or division had been able to scale at least half of the digital proofs of concept (POCs) they’ve developed over the last two years.

Further, only 20% of respondents said that they were able to scale more than 20% of their POCs past this pilot stage.

The report also notes that while upstream companies need to scale digital technologies to release trapped value – i.e., to generate added value from their digital investments – significant barriers remain to doing so.

For instance, 34% of respondents said they see the lack of a clear strategy and business case as the biggest barrier, up from 26% in 2017.

Further, only 15% of respondents said they are seeing more than $50 million in additional value from their digital investments, and only one in 20 (5%) said that digital is adding at least $100 million in value to their upstream business, a drop from 12% only two years ago.

“Although upstream companies continue to increase their digital investments, they’re not translating those investments optimally into tangible value – in fact, their ability to generate value from digital seems to be declining,” Holsman said.

“These companies face organizational bottlenecks and are finding it hard to scale these technologies, impeding core business transformation and the release of capital.

“Realigning digital investments and building the right operating model and digital capabilities is needed for oil companies to become agile and able to scale to value. This will require not only more support from leadership, but also a much broader ecosystem of partnerships as well.”