Online payment fraud attempts increased by 73 percent in 2019, according to a report from Sift.

Additional findings in the report reveal that cybercriminals are using mobile devices more than desktops or laptops to commit payment fraud. In fact, though Windows is the top single operating system for fraudsters, iOS and Android combine to make up more than half of attempted fraudulent transactions.

And while, unsurprisingly, the number one most targeted industry vertical in 2019 was physical e-commerce, business services, digital e-commerce, education, and on-demand services all fell within the top ten fraudiest verticals.

The most common payment type associated with fraud? Not credit cards. In fact, credit cards were beaten out by promotions/coupons, cryptocurrency, digital wallets, and even “pay with cash” options that are popular with some on-demand services.

Fraudsters swing for the fences

Rather than trying to avoid detection with smaller purchases, fraudsters look for larger scores, with fraudulent order values reaching three times the price of legitimate purchases on average.

Trying to game the system

The largest attempted purchase on Sift’s platform in 2019 was for a video game power-up sold on an online marketplace. The attempted payment was $1 million, and though obviously fraudulent, demonstrates some of the new methods bad actors are employing in order to steal from businesses. 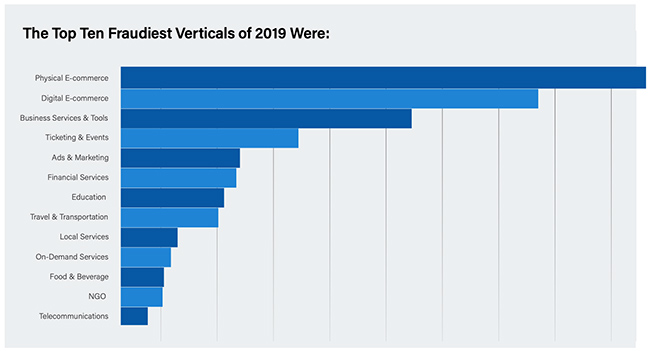 Summer is the holiday shopping season for fraudsters

Fraudsters don’t wait until the winter holidays to kick their scams into high gear. Rather, payment fraud attempts peak during the summer months.

Working on the weekend

Saturdays had the highest instances of payment fraud attempts of any day of the week.