There have been rapid substantial changes in device usage trends, and the connected security implications, as businesses shifted their operations in March due to COVID-19, according to a report by ExtraHop. 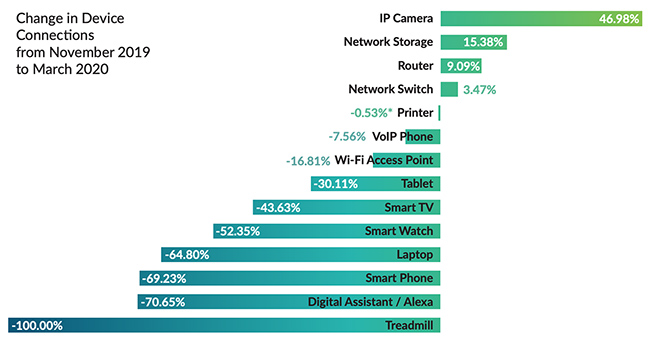 The report also warns of the security complexity and risks posed by connected devices—both those used by employees at home, and those left idle but connected to the office network.

While there are many lenses through which to explore the ways in which COVID-19 is reshaping business operations, connected devices—including IoT devices—and the ways in which people and organizations interact with them tell a story all their own.

Employees are still accessing corporate resources, often relying on questionably secure local networks that lack the safeguards of the office network and thus are more exposed to malware.

The number of connected IP phones declined by just 7.5 percent, indicating that many of these devices remain on and connected even when no one is using them.

Nearly 25 percent of those VoIP devices are Cisco IP phones, for which a critical vulnerability (CVE-2020-3161) was announced in April. Printers – at high risk for vulnerabilities and one of the most common targets of hackers – showed even smaller declines in connectivity, dropping by just 0.53 percent.

Connections from security cameras increased by 47 percent in March, indicating that many organizations are taking additional precautions against physical intrusion or nefarious activity.

Unfortunately, these devices can also expose organizations to cyber risk. Like IP phones and printers, they often have vulnerabilities and have been observed phoning data home.

And don’t forget the treadmills

The connections to the network from treadmills declined 100% when office gyms were some of the first aspects of office life to close down. But the connectivity of treadmills underscores the extent to which every device is now a connected device. IT and security departments now have a much broader attack surface to secure — even the office gym.

“The almost overnight shift to remote work required a massive effort just to ensure the availability of applications and critical resources for employees outside the office,” said Sri Sundaralingam, VP, Cloud and Security Solutions at ExtraHop.

“For many organizations, the management of IoT and other connected devices may have been an afterthought, or at least something they didn’t anticipate having to handle long term. As availability and security issues surrounding remote access become more settled, this needs to be an area of focus.”