The European Union Agency for Cybersecurity (ENISA) released a report on information security spending for network and information services (NIS) under the NIS Directive, the first EU-wide legislation on cybersecurity. 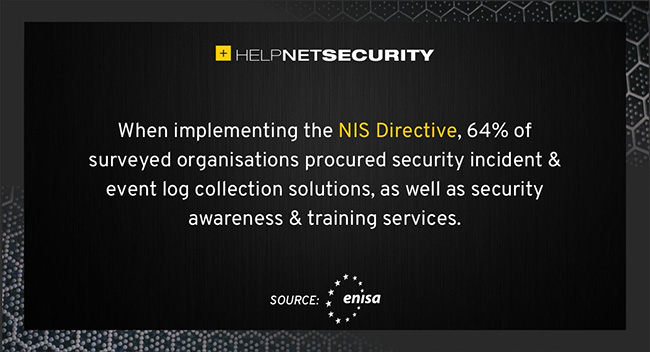 The report is based on a survey of 251 organizations of operators of essential services and digital service providers from France, Germany, Italy, Spain and Poland. Eighty-two percent of those surveyed reported the NIS Directive had a positive effect on their information security.

The report provides input to the European Commission’s review of the NIS Directive on the 16th of December, four years after the Directive entered into force and two years after the transposition into national law.

Twenty-two percent of respondents listed limited support from national authorities as one of their top challenges when implementing the Directive.

Cybersecurity investments: EU vs. US

The Executive Director of the EU Agency for Cybersecurity, Juhan Lepassaar, said: “This data indicates that the NIS Directive has been a great tool to drive investments, but recognises that certain gaps still exist, and a clearer strategic framework and more elaborated approach is needed. The review of the NIS Directive is timely and can therefore address these challenges — building a stronger network and information security framework.”