It is widely known that the healthcare industry is a primary target for cyberattack, with increasingly sophisticated and highly-motivated adversaries seeking to exploit both human and technological vulnerabilities more frequently than ever before. 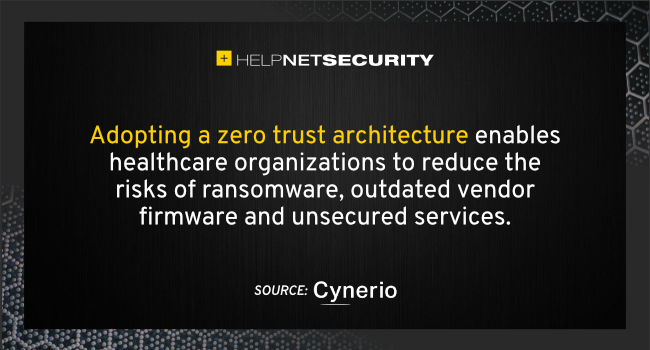 To better defend their networks, systems, and devices from an ongoing barrage of attack techniques, healthcare organizations are increasingly turning to zero trust architecture, which does away with the traditional security perimeter, assuming that every user and every device on the network could potentially be malicious.

Vendor firmware presents a significant risk to healthcare environments, as software code is not often written with security in mind and authentication is weak or nonexistent, and in many cases, credentials are hardcoded.

In addition, data transfer is often based on proprietary communications protocols that are unsecured and unencrypted. Firmware updates are rarely issued by vendors and vulnerabilities aren’t well understood.

There are two prevalent vulnerabilities affecting millions of connected healthcare IoT devices worldwide, URGENT/11 and Ripple20. For background, URGENT/11 vulnerabilities are found in IPnet, a network communications component that is no longer supported by its original developer, yet is incorporated into software applications, equipment, and systems used by a variety of Healthcare IoT and industrial devices.

Ripple20 is a series of 19 critical vulnerabilities, with 4 more recently discovered, in the Treck TCP/IP stack, a software library built into many medical and IoT devices and embedded in third-party components of operating systems. In many devices, Treck is a low-level component and administrators may not be aware it is used on the device.

If unpatched, URGENT/11 or Ripple20 vulnerabilities can lead to the exposure and theft of electronic protected health information (ePHI), denial of service (DoS) attacks powerful enough to shut down clinical networks, and logic flaws that can interrupt normal device functionality. In other circumstances, adversaries can take remote control of medical and other IoT devices, disrupting clinical workflow and exfiltrating sensitive data from the device or connected systems.

With thousands of devices in an average hospital, it is infeasible for IT and security teams to manually test every device to discover open services, and traditional network scanning tools often cannot recognize these devices as medical devices. In some cases, scanning can interrupt their clinical operation.

It can also unintentionally expose large quantities of ePHI to unauthorized users and threat actors, impact the operational and business continuity of affected departments and expose ePHI in the form of photo and video images.

Zero trust for healthcare to the rescue