Absolute Software announced key findings from its report which shines a light on key trends affecting enterprise data and device security, and underscores the dangers of compromised security controls in expanding an already wide attack surface for today’s enterprises. 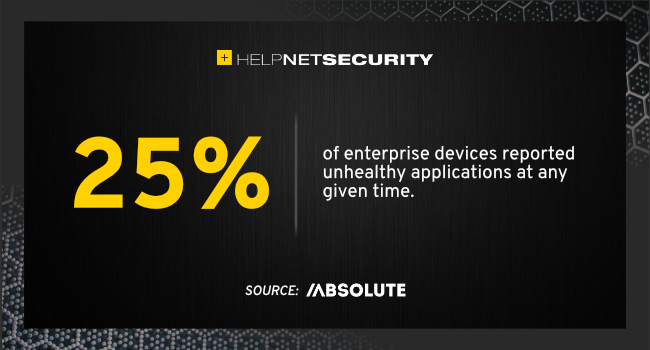 Researchers estimate that the number of ransomware attacks grew by more than 150% in 2020, fueled by the global pandemic and the massive disruption to IT and security operations.

According to The Coveware Quarterly Ransomware Report, the most common software vulnerabilities exploited by ransomware attackers in Q1 (Jan – Mar) 2021 involved VPNs. It goes on state that “the cyber extortion economic supply chain demonstrated how a vulnerability in widely used VPN appliances can be identified, exploited and monetized by ransomware affiliates.”

The findings reveal that the need to support and secure remote workforces only exacerbated the existing complexities found in today’s endpoint environments – and with increasing complexity comes the increased risk of friction, failure, and noncompliance.

One in four devices analyzed had critical security controls — such as encryption, antivirus, or VPN — considered to be unhealthy, or not working effectively, at any given time. If left unaddressed, almost any application deployed on the endpoint carries the potential of becoming an attack vector.

“The trends in this year’s report — unaddressed vulnerabilities, unprotected data, and failing security controls – are clear indicators that it is time for organizations to put rigor around ensuring the endpoint security tools they’ve invested in are effectively protecting their valuable, and vulnerable, corporate devices and data,” said Christy Wyatt, President and CEO of Absolute.

“And, the findings underscore the critical need for resilient endpoints and applications in the evolving ‘work from anywhere’ era. The ability to identify and mitigate risk is dependent on having the ability to monitor the state of every device and application, identify where things might be fragile or falling down, and autonomously heal them when needed.”