Overall, the first half of 2021 shows a 22 percent increase in the volume of phishing attacks over the same time period last year, PhishLabs reveals. Notably, however, phishing volume in June dipped dramatically for the first time in six months, immediately following a very high-volume in May. 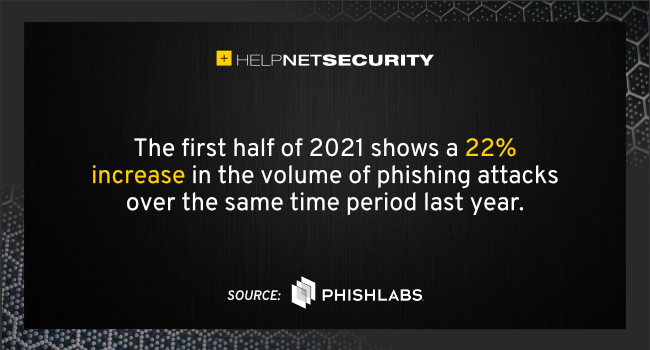 “Bad actors continue to utilize phishing to fleece proprietary information, and are developing more sophisticated ways to do so based on growth in areas such as cryptocurrency and sites that use single-sign-on,” says John LaCour, CTO of PhishLabs.

“That said, it’s interesting to see the significant dip from May to June 2021. We’ll continue to monitor through the summer and analyze if we’re seeing a trend in the right direction, or if attackers simply took a summer vacation.”

The impact of phishing attacks in H1 2021

“These core findings paint a very specific picture of what bad actors are turning to in order to infiltrate corporate accounts. For one, as they’ve gained prominence, crypto exchanges are being targeted with many of the same cyber threats that larger, more established financial institutions have faced for years. Crypto firms need to be aware of and better prepared to deal with online impersonation and other scams,” says LaCour.

“Additionally, the continued increase in SSO attacks suggests that criminals recognize that compromising an account used for SSO can give them access to many more secondary accounts that trust the SSO account for authentication. This makes these platforms a highly rewarding target, especially if they gain access to Office365 at the enterprise level. An in-depth approach combining technology, user education and operational processes are needed to combat this trend.”