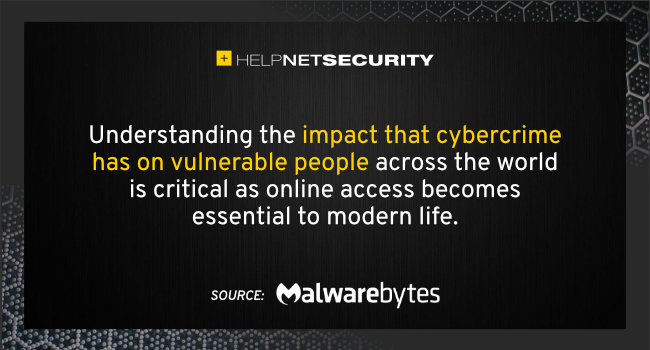 A new report by Malwarebytes, Digitunity and Cybercrime Support Network, which polled more than 5,000 people across the United States, United Kingdom, and Germany, details how people experience cybercrime worldwide, demonstrating cybercrime does not impact everyone equally. In fact, the report illustrates that demographics impact how often individuals are targeted, as well as their emotional response to becoming a victim.

Overall analysis of data suggests disadvantaged groups facing barriers in society, such as those with lower incomes and lower education levels, feel less safe about their online experiences, are more likely to fall victim to an attack, and at times report experiencing a heavier emotional burden when responding to cyberattacks.

Depending on the type of cybercrime, certain groups report a higher likelihood of encountering threats online. For example, more women receive text messages from unknown numbers that include potentially malicious links than men (79 percent compared to 73 percent) and more Black people, Indigenous people, and People of Color (BIPOC) experience hacked social media accounts (45 percent compared to 40 percent) and instances of identity theft than White people (21 percent compared to 15 percent). Additionally, individuals aged 65 years or older have had their credit card information stolen more than anyone from a younger age group (36 percent).

After a year that has featured some of the largest cyberattacks in history, the report also examines the disparities between different audiences and how various types of online attacks affected their lives. In fact, the likelihood of cybercrime and the responses to those cybercrimes greatly impact how individual groups—based on age, race, gender, income, and education—feel about their own personal safety and privacy online.

The report also found respondents who identified as White are significantly more likely to feel safe online (44 percent vs. 38 percent for BIPOC respondents), while women feel the least safe online (35 percent reported they do not feel safe, compared to 27 percent of men).

“Understanding the impact that cybercrime has on vulnerable people (or populations), particularly women and minorities, across the world is critical as online access becomes essential to modern life. The disparity between populations feeling safe online and the emotional impact of threats on already vulnerable communities is unacceptable,” said Marcin Kleczynski, CEO of Malwarebytes. “The work Digitunity and Cybercrime Support Network are doing to educate and empower communities cannot be understated. As an industry, we need to work together to make safe internet access available to everyone, regardless of income or their ability to pay.”

As the world becomes more digitally connected, cyberthreats will continue to advance and become even more dangerous for underserved and under-resourced communities. Cybersecurity education and awareness around free tools, such as antivirus solutions, has the power to prevent online attacks and their emotional and financial consequences. In fact, the report exposed that of those who were attacked by ransomware, almost half were able to fix the issue with their antivirus or cybersecurity program.